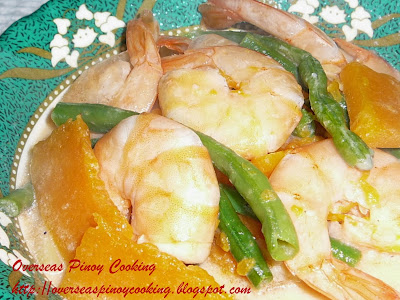 Ginataang Hipon. Here is a quick ginataan seafood dish using big shrimps or prawns. Although fresh coconut is available in this part of the globe I have intentionally used powdered coconut milk on this recipe for the benefit of most of my readers who are overseas. Every ingredients on this recipe are most likely available in most cities around the world. Shrimp or prawns, pumpkins, string beans and of course powdered coconut milk. Cooking is simple, but the shrimp has to be pre-cooked or buy the steamed shrimp or prawns if available at your favorite supermarket. Remove the head and legs of each shrimp pre-steamed cook with crushed garlic and a dash of salt. Cooking method is the same as my previous post of ginataang alimasag. sauté the aromatics ingredients, add in the coconut milk let simmer for sometime and add in shrimp and vegetable. Here is the complete recipe. 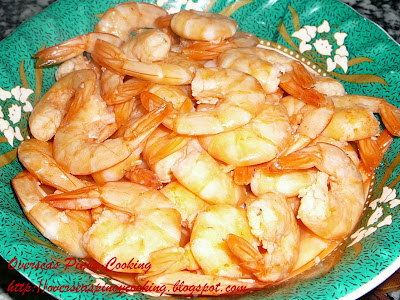 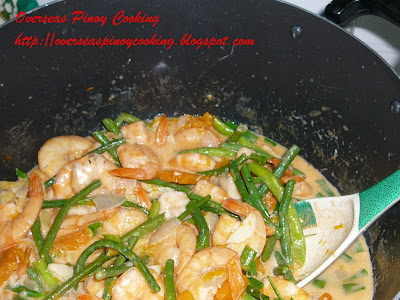 Remove head and legs of each shrimp pre-steamed cook with crushed garlic and a dash of salt. In a large pot sauté garlic and ginger. Add coconut milk powder diluted in 2 to 3 cup of water, bring it to a boil and simmer for 10 to 15 minutes or until the liquid is reduced by half, stirring occasionally. Add in shrimp, vegetables and red chillies, season with salt. Cover and cook for 3 to 5 minutes or until vegetables are just cooked . Add leeks and cook for another 1 minute. Serve hot.