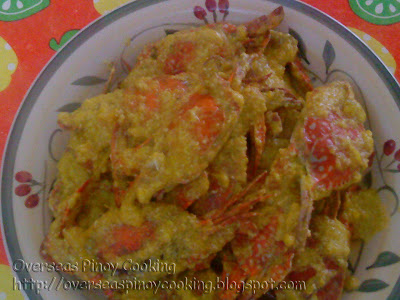 I sometimes received recipes, suggestions or alternative ingredients and cooking methods to some of my recipe, and even photos cooked by readers. From now on I will be posting some of those recipes, so send me now a recipe of your favorite dish, including picture please indicate that you are willing to share the recipe and I will publish them here at OPC.

Here’s one recipe send by Ansherina and avid reader, called Crab con Kalabasa, her version of ginataang alimasag with squash. She preferred that the squash should be mashed to form a thick creamy sauce for the dish. Sure enough the dish looks appealing with all that yellow and orange color of the dish. According to her it is definitely very yummy. Judging from her method of cooking and by the looks of the dish photo it’s sure is yummy.

To translate for the benefit of other readers here’s how I interpreted it;

First, boil (or steam) the crabs with salt to taste, keep aside. Suttee the crabs in garlic, ginger and onion. Add in the second extraction of coconut milk, let boil. Now add the squash and simmer until the squash soften and starts to disintegrate. Mash the squash further by pressing the softened squash against the bottom or wall of the pan. Now pour in the concentrated first extract of coconut milk, season with salt to taste and Maggie Magic Mix for a yummier result. Continue to simmer until the sauce thickens to a creamy consistency. The kids really like it and will have the appetite to eat more because of the tasty mashed squash.

I will try this recipe in the future to give you the exact measurements of the ingredients. As per the description, quantities are approximate which is typical to most Pinoy cooking.