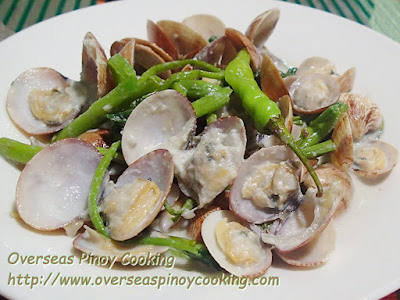 Ginataang Halaan with Kangkong. Ginattang halaan is not new to OPC, we have a couple of versions of ginataang halaan with malungay, click the link below should you want to check out the post on the archives. 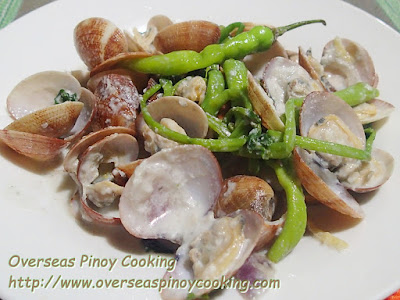 Today I want to share the recipe of another ginataang halaan using kangkong for the vegetable ingredient. Cooking is basically the same, except that the stalks of kangkong should be separated from the leaves. Kangkong stalks require longer cooking time than the leaves and should be added at earlier stage of cooking.

Here is the recipe of my Ginataang Halaan with Kangkong, enjoy. 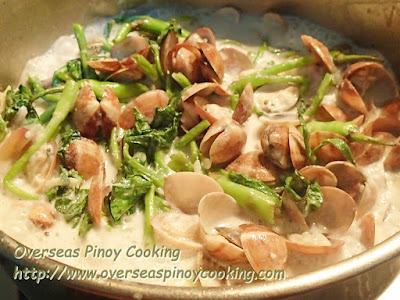 Place clams in a plastic container with lid, cover with water and let sit for several hours to allow the clams to expel sand and discard sea water, change water frequently, wash and drain. In a large sauce pan sauté garlic, ginger and onion until fragrant. Add in siling labuyo and 3 cups of the coconut milk, bring to a boil and simmer for 8 to 10 minutes, stirring occasionally to prevent from curdling, then add in the kangkong stalks. Continue to simmer for another 3 to 5 minutes or until liquid has reduced to half. Add in clams, the remaining coconut milk and kangkong leaves. Cook for 3 to 5 minutes or until all the clam shells start to open. Season with salt to taste. Serve immediately with a lot of rice.
See other Ginataang Shell Seafood recipes: