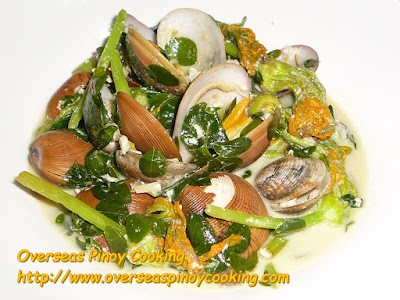 Ginataang Halaan with Malungay at Bulaklak ng Kalabasa. Squash flower are deliciously beautiful, they are in abundance during the summer months in the in Muntinlupa and San Pedro, Laguna area. The banks of Laguna Lake become dry during summer, exposing a very fertile land. The residence along the lakes take advantage of this fertile dry bank of the Laguna Lake and plant all kinds of vegetables including kalabasa, that’s where our special squash flower ingredient came from. There is an abundance of fresh vegetables during this time. 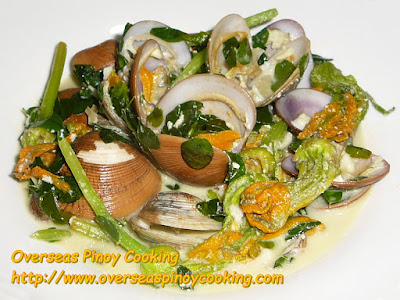 I thought the beautiful squash flowers would go best with one of my favorite seafood, halaan cooked with coconut milk. As expected my Ginataang Halaan with Malungay at Bulaklak ng Kalabasa, did not only looked great it did taste great as well. 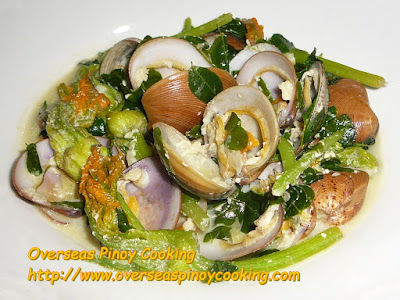 Here is the recipe of my Ginataang Halaan with Malungay at Bulaklak ng Kalabasa, would you try to cook it if you find squash flower at your location? 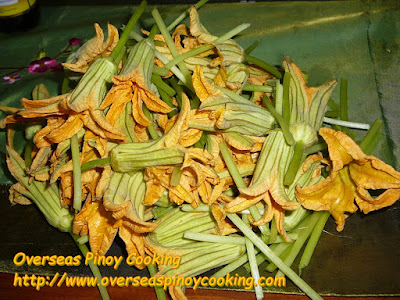 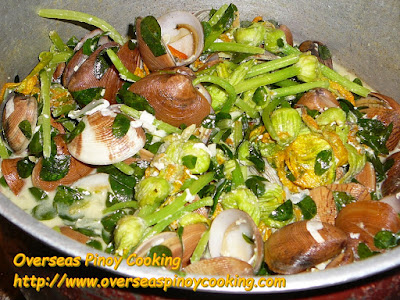 Place clams in a plastic container with lid, cover with water and let sit for several hours to allow the clams to expel sand and discard sea water, change water frequently, wash and drain. In a large sauce pan sauté garlic, ginger and onion until fragrant. Add in siling labuyo and 3 cups of the coconut milk, bring to a boil and simmer for 15 to 20 minutes or until liquid has reduced to half, stirring occasionally to prevent from curdling. Add in clams, the remaining coconut milk, malungay leaves and squase flower stems. Cook for 3 to 5 minutes or until all the clam shells start to open. Add in the squash flowers, season with salt to taste and cook for another minute. Serve immediately with a lot of rice.
See other Ginataang Shell Seafood recipes: