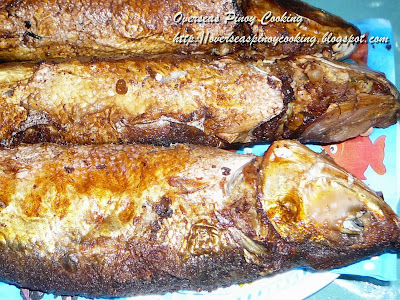 Preparation of the bangus for relleno is equally tedious. After selecting the right size of bangus, it is then scaled, gutted, and the intestines removed. 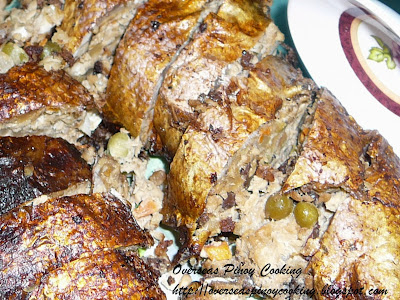 There are three ways to remove the fish meat off the skin:

Pounding, gently pound fish to loosen meat from the skin. Use flat side of a knife in pounding. The spine is then snapped at the nape and near the tail. Insert the end of the handle of a sandok through the fish neck. Gently scrape the meat off the skin by scraping down to the tail, going around and on the other side of the fish. If the meat is entirely separated from the skin, remove the handle, squeeze and push out meat starting from the tail going out through the neck

Using spatula, a long and slender spatula is carefully inserted between the skin and meat, through the fish neck, and slowly pushed, pulled and moved around to separate meat from the skin. The spine is then snapped at the nape and near the tail. The meat is then squeeze and push out starting from the tail going out through the neck

Slitting, the fish is pound and slit open at the back with a very sharp knife, remove the backbone and scrape the meat off the skin with a spoon. This procedure also involves the extra work of sewing up after stuffing the fish. 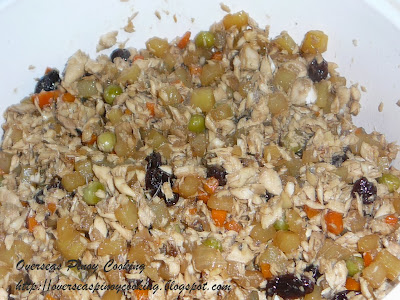 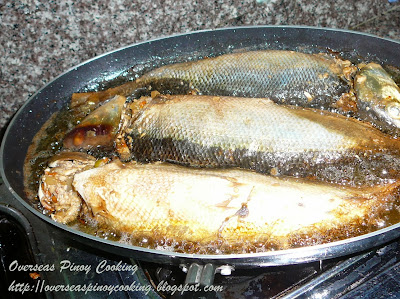 Ask the fish monger to prepare/cut the bangus for relleno. Marinate the head and skin in a mixture of kalamansi juice, soy sauce and black pepper for 10 to 15 minutes. Poach fish meat, drain and let cool. De-boned and flaked fish meat, set aside. In a sauce pan, sauté garlic, onion add in flaked fish and 2 tbsp. soy sauce. Add carrot, potato, green peas, and raisin. Season with salt and pepper, and sauté for 2 to 3 minutes. Transfer mixture in a bowl and let cool. Add in beaten eggs to the mixture and mix well. Drain marinade off the fish skin and head. Using a spoon, stuff the marinated fish head and skin through the neck, with the filling mixture. Fry the stuffed bangus until golden brown.
Bangus Fish Fish Relleno Fried Noche Buena Pinoy Recipe