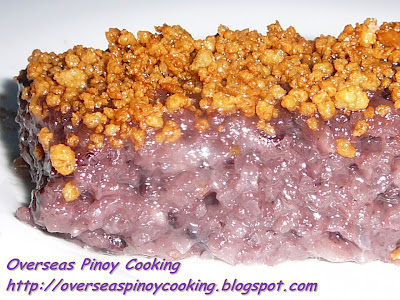 Biko na Pirurutong. Rice cakes cooked in coconut milk are the most popular native dishes prepared during the holiday season. Biko is one of the rice cake delicacies that are cooked during the Christmas season. 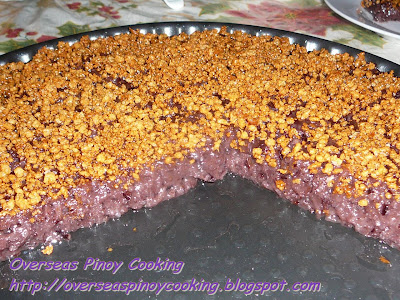 The usual biko is made up of plain glutinous rice the color depends on the sugar used, when cooked with refined sugar the tone is lighter compared to the golden brown color when using the un-refined brown sugar. The yellowish colored biko get the yellow tone from the additional ingredient of squash. Cooking biko is not actually that easy, be ready for a lot of stirring. Today I want to cook a biko with a lavender color using the dark colored glutinous rice called pirurutong. The resultant sweet rice cake was not bad at all. Here is the recipe. 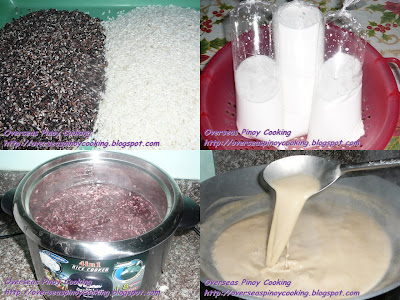 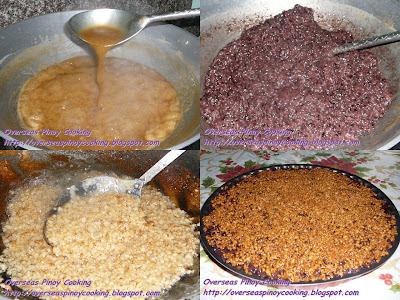 Wash glutinous rice, put in a ricecooker, add salt, grated ginger and add water as per ricecooker instructions. Cook until the cook switch has automatically switch off, remove rice cooker mains and keep aside. In a large wok put 1 cup of water, 2 cups of coconut milk, brown sugar and grated kalamansi and orange rind. Bring to a boil and simmer at medium heat for 15 minutes. Keep on stirring until the mixture is reduce to half and the has turned to thick coconut milk-sugar mixture called latik. Stir in the half cooked glutinous rice, mix and blend thoroughly, stir cook for another 15 minutes. When done remove from wok, place in a non-stick tray, flatten and keep aside. In a small wok boil the remaining 2 cups of coconut milk and stir cook for 15 minutes or until it start to render oil. Continue cooking until the coconut milk residue is lightly toasted and the color has change to golden brown. Drain oil and set aside. Top biko with the toasted coconut. Let cool down before serving.