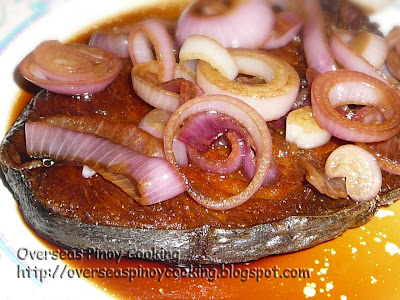 Tanguige Bistek Tagalog is another innovative cooking method of this premium fish. In the tradition of cooking beef slices marinated in soy sauce and kalamansi, called bistek Tagalog, beef is substituted with tanguige fish slices. This is not new in fact I already have recently posted a similar fish bistek dish using milkfish belly. Cooking method is basically the same except that the used marinade is discarded, for the reason that the used marinade becomes curdled with the fish juices and blood. Do not overfry the fish it should be just crisp and golden brown on the outside and succulent in the inside. 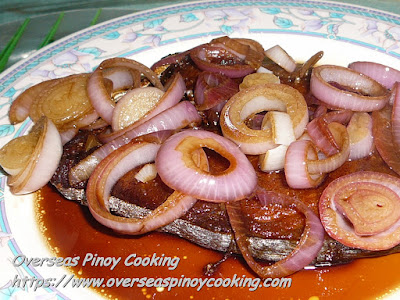 The onion rings should also be stir fried separately and again not overdone to retain its crispiness and natural flavors. Here is the recipe. 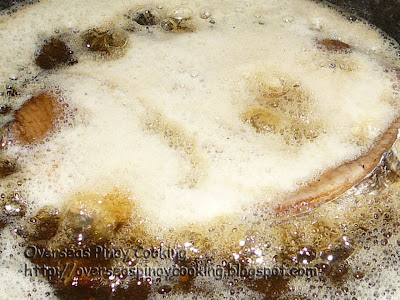 Marinate sliced kingfish in a mixture of; half of the soy sauce, half of the kalamansi juice, garlic and pepper for 15 to 30 minutes in the refrigerator. Remove the fish from the marinade and discard the used marinade. In a frying pan heat generous amount of oil and fry the sliced kingfish in medium heat for 2-3 minutes each side or until golden brown, when done drain excess oil in paper towel, keep aside. Using the same wok discard excess oil and stir fry onions until translucent remove from frying pan and set aside. Pour 1 cup of water, the remaining soy sauce and kalamansi juice into the frying pan, bring to a boil. Simmer for 2-3 minutes or until sauce is reduced to half. Return the fried milkfish belly, add in the onions and simmer for a minute. Serve with a lot of rice.