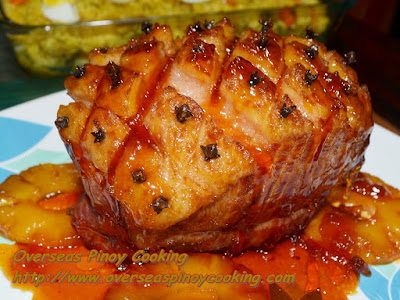 Pinoy Pineapple Honey Glazed Ham. For this Christmas season I would like to share an easy way to glaze your ball cut ham to make it more appealing and of course super yummy. I have mentioned the King Sue Pina Ham on my ingredients, firstly because that what I used, secondly it has a good fat intact even though it is just an economy ball ham cut. But of course any brand of ham with fat will be fine. 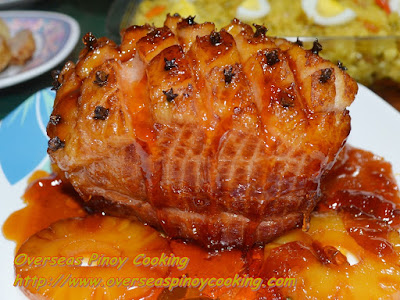 As I have said my version of Pinoy Pineapple Honey Glazed Ham is easy to prepare, it can be done in every household, even without an oven. The reason that the ham was placed in an oven I wanted some caramelization of the fats, on the cooked ham for visual appearance. I you don’t have an oven just skip the caramelization process. 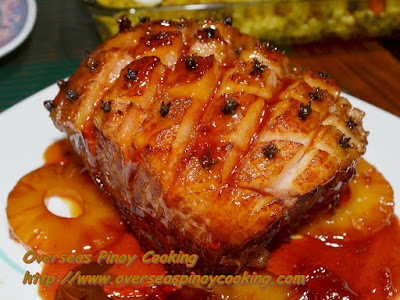 Here is the recipe of my Pinoy Pineapple Honey Glazed Ham. 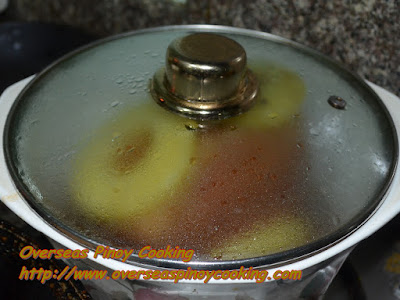 Score, cut slit the fat of the ball ham to form a diamond pattern. Combine the liquid drippings from the ham, the pineapple juice and the syrup from the sliced pineapple in a saucepan, bring to a boil over. Carefully place the ham in the sauce pan the try to place the pineapple slices over the ham. Bring to a boil and simmer at low to medium heat for 15 to 20 minutes. Remove the cooked ham and pineapple slices from the pan, keep aside. Continue to simmer the remaining liquid until the glaze start to thicken, stirring occasionally.
Brush some glaze over ham. Pin a single clove stem on the center of each diamond slit of the ham fat then place the ham in a roasting pan. Put the ham in the middle of an oven preheated to 200ᵒ C, bake for about 10 to 15 minutes, brushing with the pineapple honey glaze every a couple of times until ham fats start to caramelize. When done remove from oven and place in a platter with the cooked  sliced pineapple, pour over the remaining glaze and serve.
2015 Celebration's Recipe Baked Ham Ham Noche Buena Pinoy Pork Pork Ham Recipe