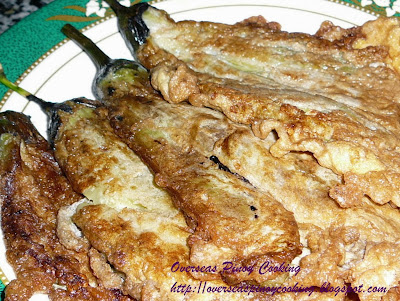 Tortang Talong is another mainstay at carinderias, it is simple cheap and absolutely liked by most Pinoys young and otherwise. The best tortang talong would be the ones with out any filling just with beaten egg seasoned with salt and pepper, this way you could really enjoy the succulent eggplant wrap in egg infused with the juice of the grilled eggplant. It is easy to prepare you would not even need a griller to grill the eggplant just broil them on the open flame of your gas stove until the skin is charred, let it cool and remove skin. It is very important though that the eggplants must be slit open to check for any worms inside the meat. Check out photos on my previous post on poqui poqui. 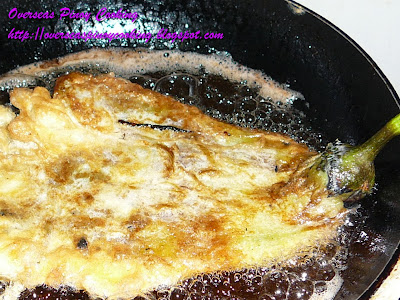 Grill each eggplant until skin is charred, let cool. Remove skin of each eggplant. Using a knife slit open halfway along the body of eggplant and spread out and flatten its meat and set aside. In a small bowl, beat egg one at a time and season with salt and pepper. Soak eggplant one at a time in the beaten egg and let the eggplant absorbed the egg. In a small frying pan, heat oil over medium heat and pour the egg and eggplant in the heated oil.