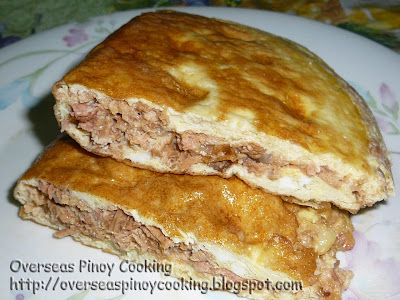 Corned Tuna Omelet. Corned tuna is the latest addition to the caned tuna products that has now caught the attention of Pinoy consumers. This is probably because of the intensive advertising campaigns of the two brands that produce corned tuna. Lately a manufacturer of a caned corned beef has also jump into the band wagon which is trying to imply that the term “corned” is for corned beef, the fact is corning is a process of curing game meats with salt/brine. Never the less in my personal opinion the corned beef comparison has generated more curiosity to the consumers which is bringing more people to the canned food shelves of supermarkets.

Surfing the nett for a method on how to cook or serve corned tuna will mostly return results in gourmet style cooking methods and preparations. For the benefit of my readers who are generally looking for a simple and practical cooking method of canned tuna or corned tuna in particular here is a simple recipe of a corned tuna omelet. 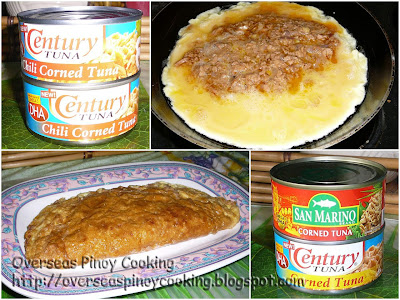 In a pan sauté garlic, onions and tomatoes, add in the corned tuna and stir cook for 2 to 3 minutes or until most of the liquid has evaporated. Keep aside. In a large frying pan heat enough cooking oil when it starts to smoke, reduce to the lowest possible setting. Pour in the beaten eggs (alternately pour in manageable amount and cook in batches), cook until the bottom portion start to solidify. Now add in the sautéed corned tuna on top of the egg making sure that most the fillings are concentrated at the other half of the egg. Continue to cook until most of it has solidified except the top surface. Using a large turner turn to fold the omelet to form a half circle, cook for another minute or two or until the omelet has completely solidify. Flip the omelet and continuity to cook until the inner portion is cooked.
See other Torta recipes; Tortang Talong with Tuna Flakes Tortang Talong with Giniling Sardine in Tomato Sauce Omelet Tortang Sardinas, Sardine Omelet Tortang Patatas, Potato Omelet Tortang Talong
Breakfast Omelet Egg Omelet Pinoy Recipe Sardinas Torta