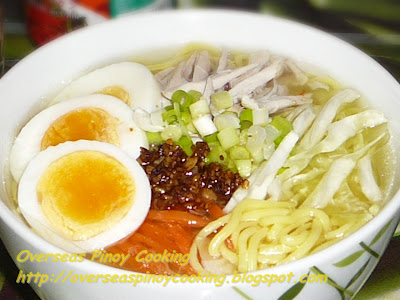 Chicken Mami is a comport food for most Pinoy from all walk of life. From the lowly chicken mami peddled in karitons at the streets to the mami served at expensive Chinese restaurants. The chicken mami was enjoyed by our grand parents from the classic chicken mami of then Ma Mon Luk restaurant to the favourite chicken mami of the younger generations serve at now popular fast-food restaurant. Chicken mami is simple to prepare the only setback is to eat it strait away while it is still steaming hot as the noodles tends to get soggy. Noodles to be used should be cooked just right, overcooking it a minute more then it’s ruined. In fact the mami noodles should be blanched only. The fresh mami noodles sold localy in Metro Manila is fine but it should be rinse vigorously since they used a lot of lye water on them. It should also be blanch a bit longer to reduce if not totally remove that lihiya (lye) taste. A delicious chicken mami will defend on the quality of broth used. If need be a whole chicken is to be boiled for at least 30 minutes then the broth is reduced for a concentrated chicken broth. Here is the recipe. 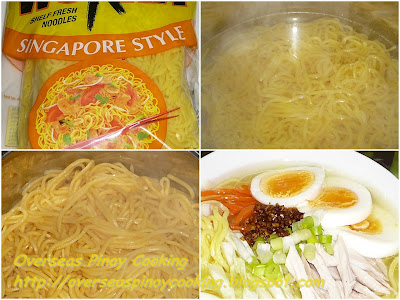 For the broth boil half chicken in a big pot combine all the ingredient and water up to 2” above the chicken or estimated amount for 3 to 4 servings, let boiled and simmer for at least 30 minutes, remove scum that rises. Remove chicken an set aside to be shredded later on. Continue to boil the chicken broth until just enough for required number of servings. Keep it under heat until ready to served.

To prepare the mami, in a bowl put the blanched noodles. Add all the topping ingredients and pour the steaming hot broth over the bowl. Season with salt and pepper to taste. Garnish with boiled egg slices, chopped spring onions and the fried garlic, serve with patis.