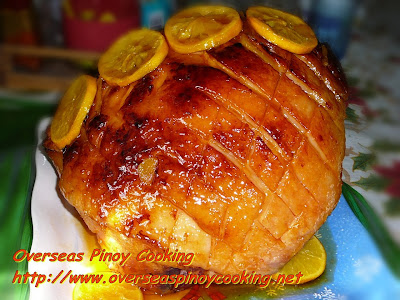 Orange Glazed Ham, Pinoy Style. Our company have been traditionally giving away leg hams to every employee every Christmas. Most of us Pinoy are not used to having whole leg ham in our kitchen even myself I find difficulty trying to figure out what to do or how to cook this half leg ham every Christmas. In the end I ended sharing the ham to my neighbours. 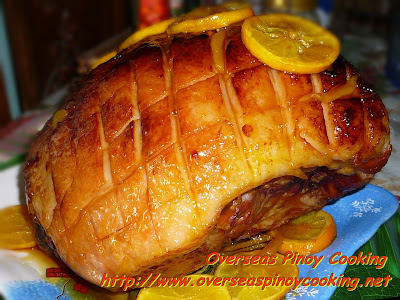 Ok this time I tried to cook this big leg ham in an oven and glaze with orange syrup. If you happened to have a leg ham this Christmas you can try it, the result was not so bad. Now if you do not have a leg ham the recipe can also be adapted to smaller hams that we Pinoy are used to other wise try the Pinoy Pineapple Ham recipe in the archieves. Here is the recipe of my Orange Glazed Ham, Pinoy Stype. 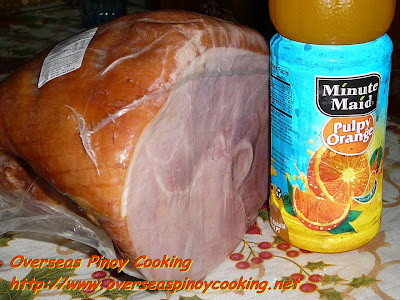 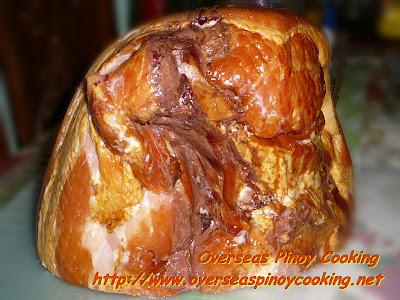 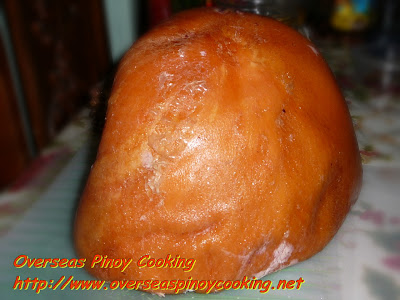 Cut and remove the rind of the ham by running a small sharp knife under the rind, around the edge of ham. Lift the rind in 1 piece using your fingers to separate the rind and the fat, taking care not to damage the fat leaving a uniform fat thickness. Score, cut slit the fat to form a diamond pattern. Place ham in a large roasting pan and keep aside. Combine the fresh and pulpy orange juice, sugar and ginger in a small saucepan. 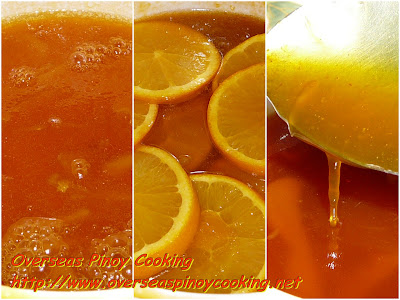 Add in the sliced oranges and bring to a boil over medium heat and simmer for 3 to 5 minutes. Remove the oranges and keep aside. Now continue to simmer for another 10 to 15 minutes or until the glaze start to thicken, stirring occasionally. Brush some glaze over ham and place in oven preheated to 180ᵒ C, bake for about 45 to 60 minutes, brushing with the orange glaze every 10 minutes. Now increase the oven temperature to 200ᵒC and continue to cook for another 15 to 20 minutes, brushing with the glace every 5 minutes or until ham caramelise. During the final 5 minutes of cooking arrange the sliced oranges on top of the ham. When done remove from oven. Serve hot or cold in slices. 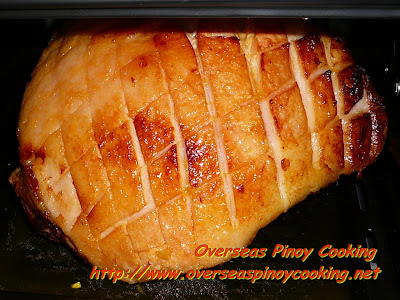