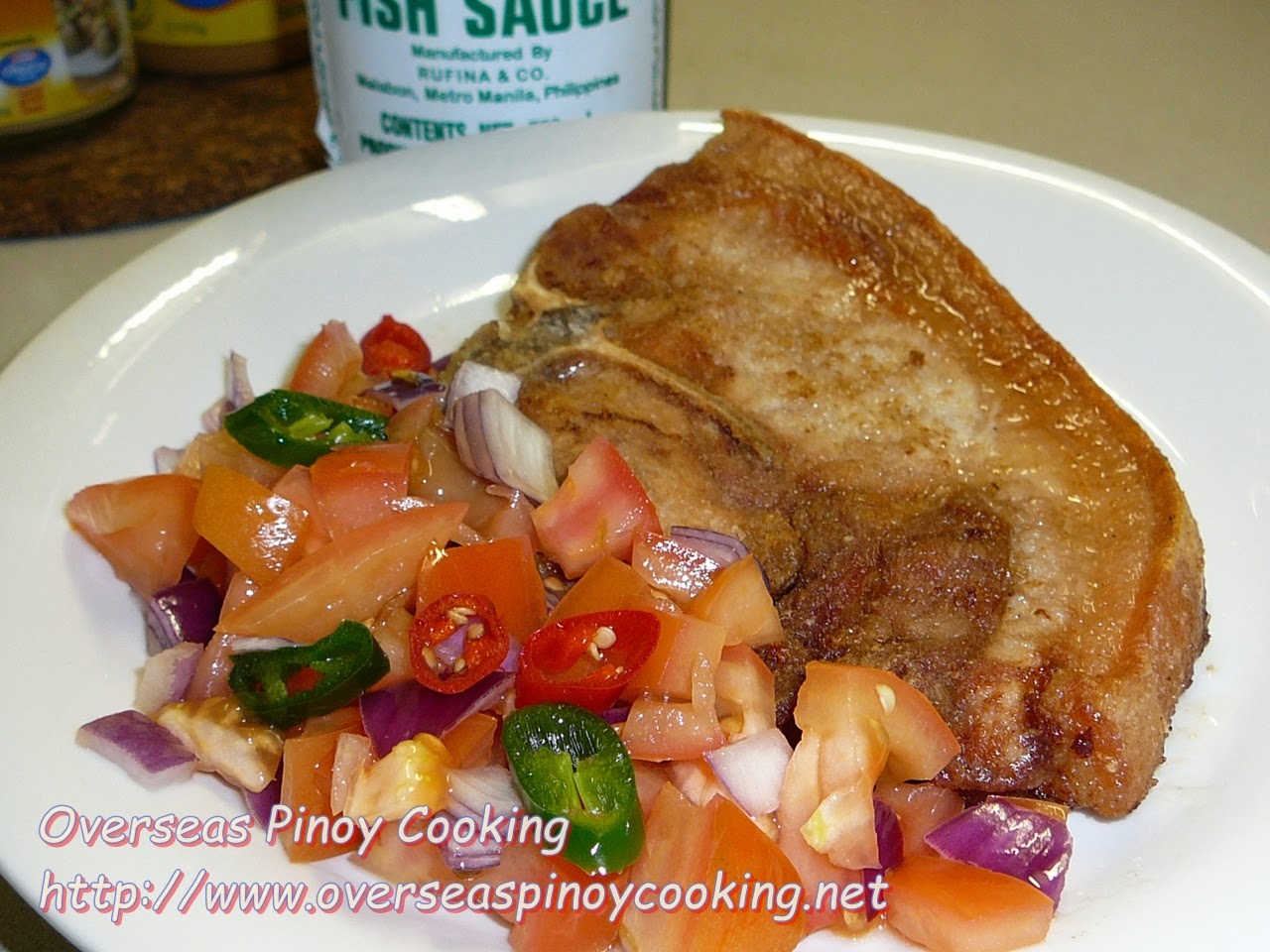 Fried Pork Chop with Tomato Onion Chili Relish. Fried pork chop is one of the more popular Pinoy eatery or carinderia dish. A small piece of pork chop is usually dredged in flour with salt and pepper seasoning. It is usually served with banana ketchup dip. At home it is served with chopped tomatoes with fish sauce dip. There are several ways to cook a pork chop. Listed below are some of the pork chop dish that we have in the archive, just click the link to check it out. 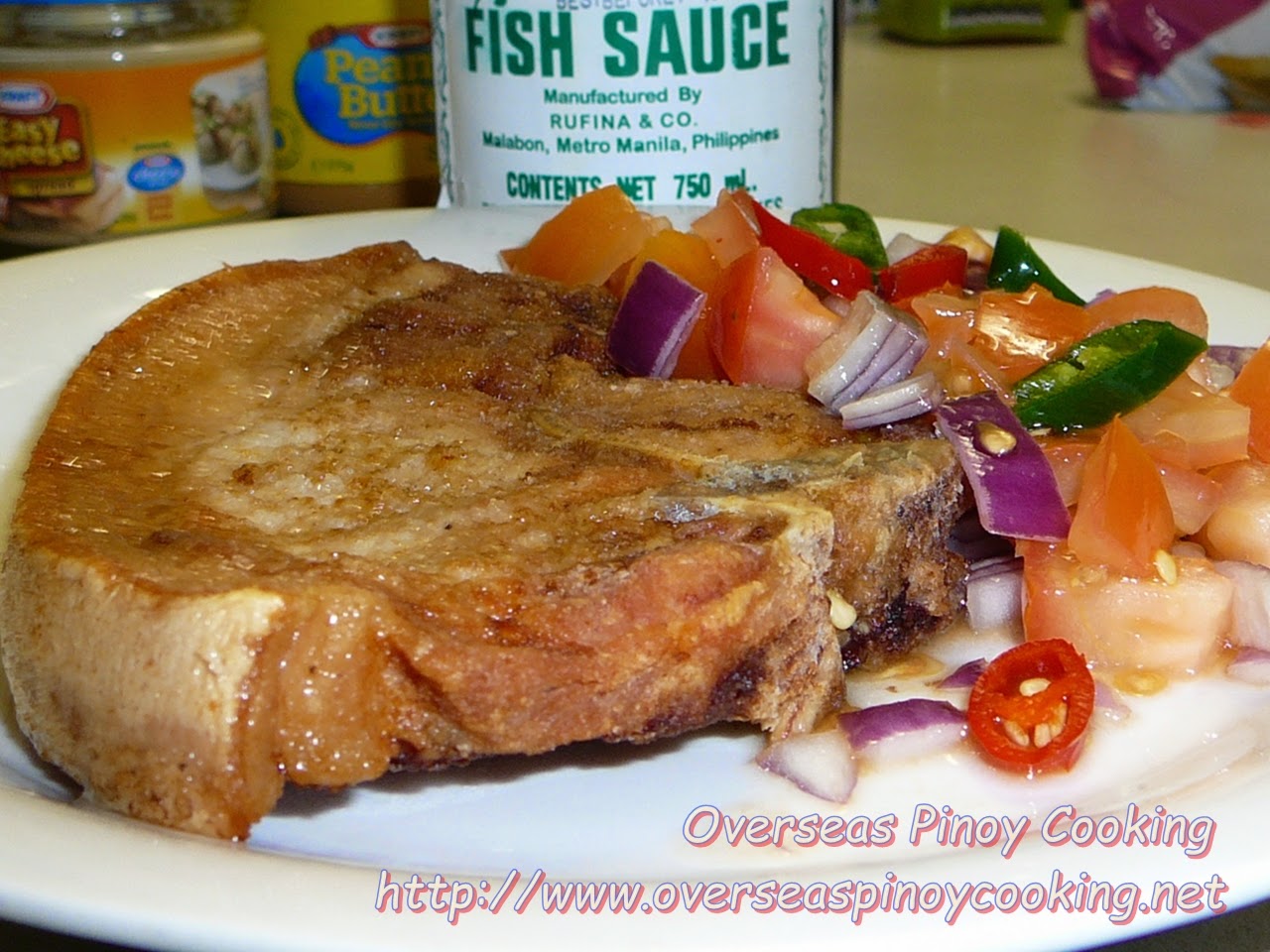 Today I would like to share a simple way to cook a fried pork chop with crisp flour coating. Using flour is recommended compared to corn starch on large cut meats. Corn starch has finer texture compared to the general purpose flour used in cooking. Because cornstarch has finer fiver it will burn faster before even the meat is cooked, in contrast flour have courser fiver which is better choice to coat larger slices of meats for a crisp coating. 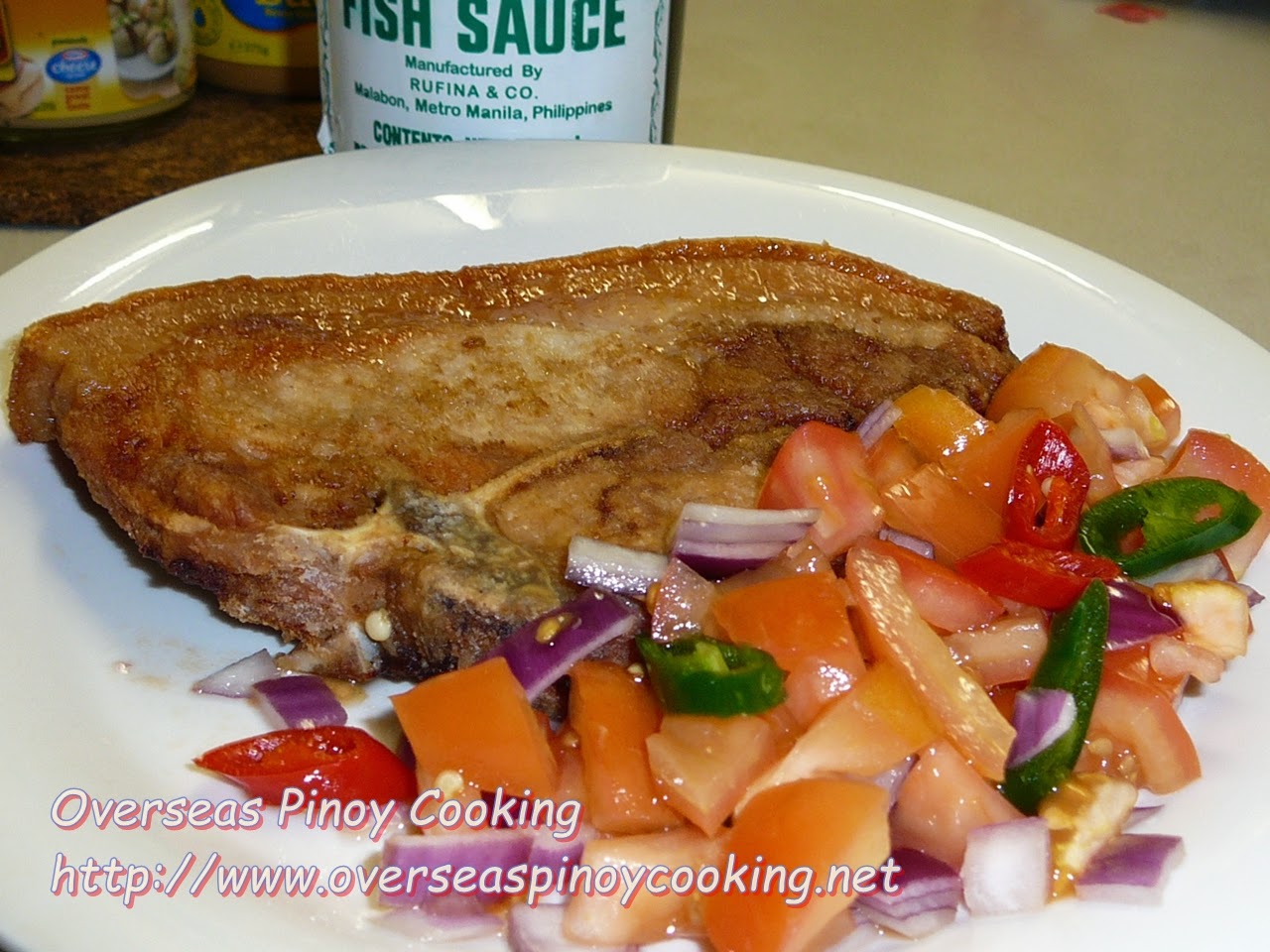 Here is the recipe of my carinderia inspired Fried Pork Chop with Tomato Onion Chili Relish. 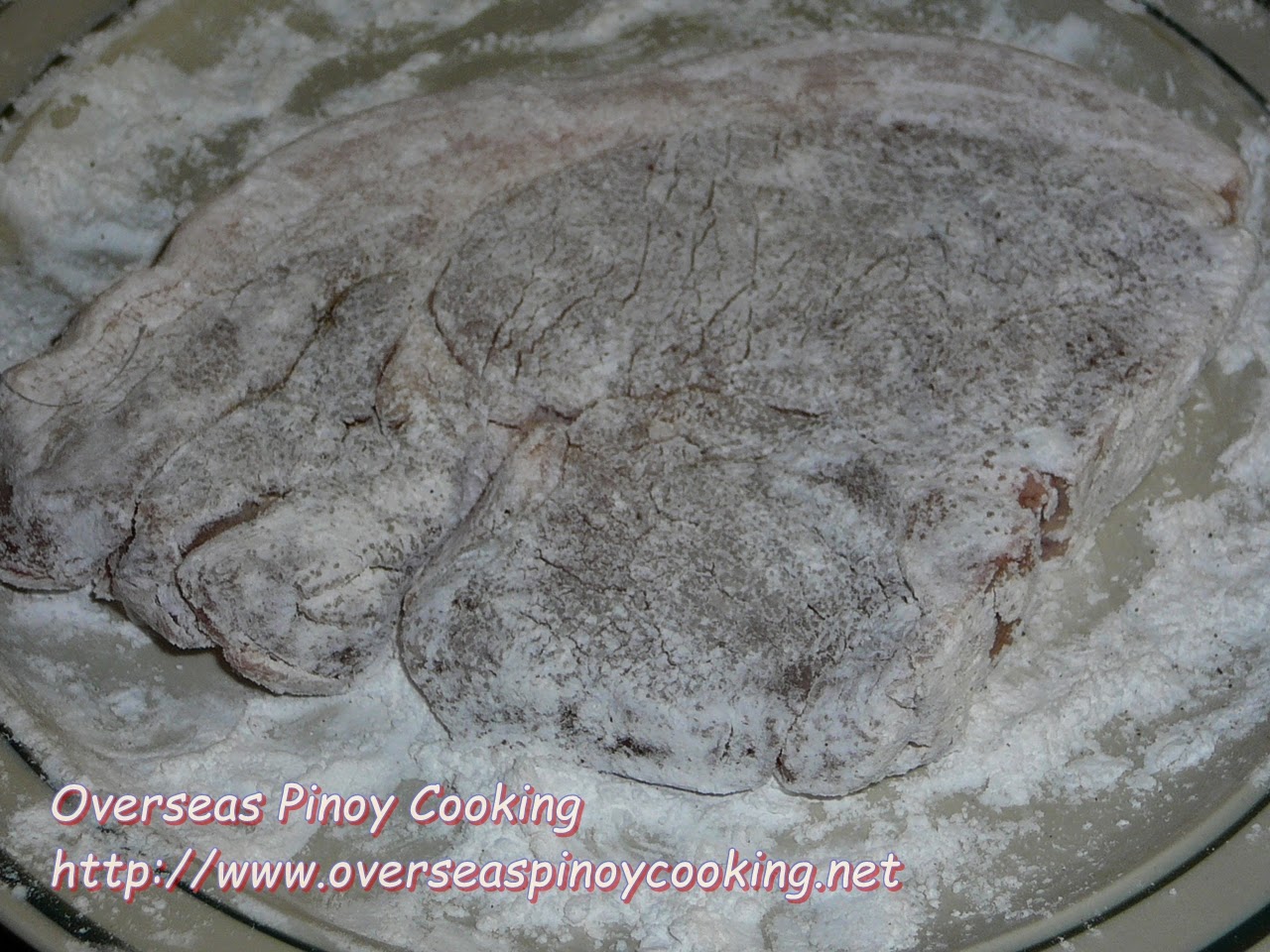 In a bowl toss the diced tomatoes, onion and chilies, and some fish sauce, place in the refrigerator until ready to serve. Dust some salt and pepper to the pork chop on both side, keep aside for about 10 to 15 minutes. In a large plate place the flour and mix in some salt and pepper according to taste. Now dredge the pork chop with the flour mixture and evenly coat on both side. Keep aside for about 3 to 5 minutes before frying. Now heat generous amount of cooking oil on a frying pan at medium to high heat until it start to smoke. Reduce heat to medium and fry the pork chop for 3 to 6 minutes, defending on the pork chop thickness, then turn the pork chop on the other side and fry for another 3 to 4 minutes. Removed from the frying pan and drain excess oil on a kitchen paper towel. Serve with the prepared tomato onion chili relish. 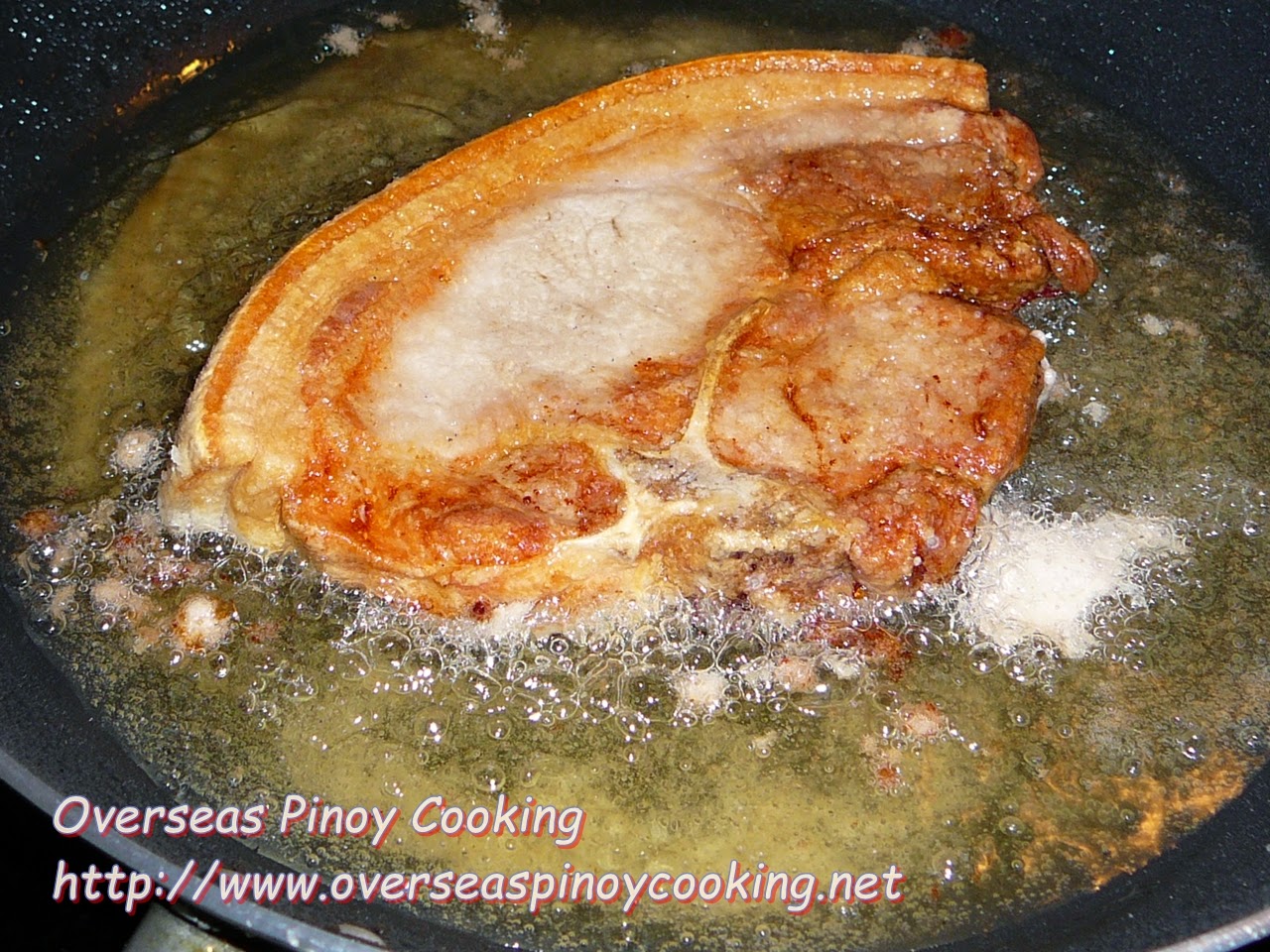