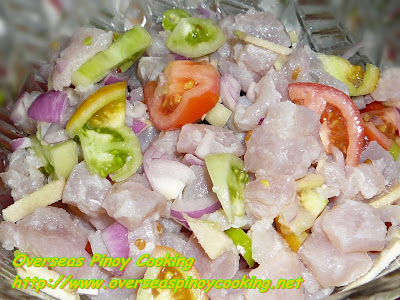 Kinilaw na Blue Marlin with Green Tomatoes, I have first tasted this during my work assignments in Davao ages ago. I have then tasted countless version of kinilaw with tomatoes, tomatoes in kinilaw na isda is common in the Visayas and Mindanao, in fact I already made a post of Kinilaw na Tanguigi na may Kamatis I used ripe red tomatoes on that version. 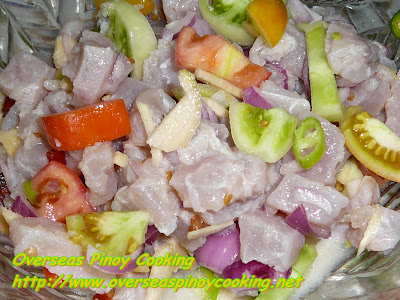 On today’s post of kinilaw I used green to red tomatoes and of course inspired by the Visayan version. I added semi riped tomatoes for color appeal for my version instead of the all green tomatoes. The ginger and onion where chopped coarsely which is how the Visayan version is prepared. Similar to my other kinilaw versions I do not usually squeeze out the juices from the fish, a vinegar soak and rinse is all that is needed. Here how I made my Kinilaw na Blue Marlin with Green Tomatoes. 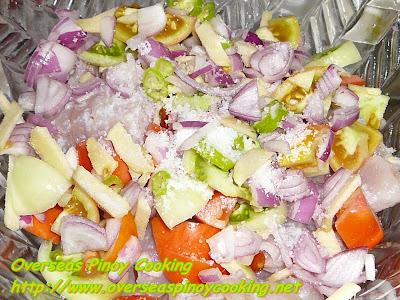 In a big bowl place the vinegar and toss in the fish, let stand for 5 to 10 minutes while preparing the other ingredients. Using a sieve drain the vinegar from the fish (do not squeeze) and return fish to the bowl add in all the chopped ingredients. Season with salt and pepper to taste. Squeeze over the juices of the kalamansi over and toss until fully mixed. Chill in the refrigerator for 5 to 10 minutes or before serving.