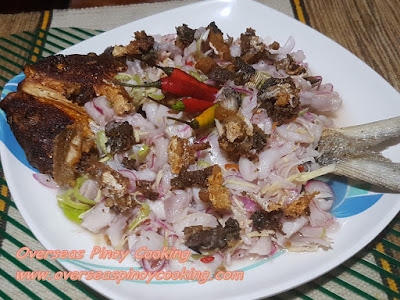 Kinilaw na Bangus. There are countless way to cook and prepare Bangus or Milkfish, our National Fish. Today I want to share my special version of Kinilaw na Bangus. I have always been hesitant to make Kinilaw out of Bangus. First because of the earthy flavour of the Bangus Fish and second the fish is bonny. 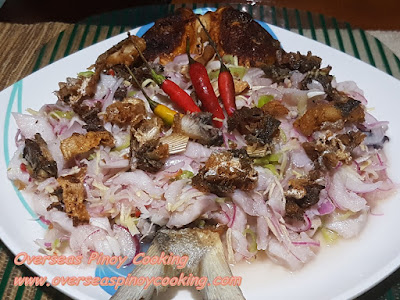 As I mentioned this is my special version of Kinilaw na Bangus, I have tried to duplicate that Kinilaw na Bangus fron that restaurant. Before I give you the recipe I want to warn you that frying the Bangus skin create a lot of splashing hot oil be warn, cover the frying fan and exercise extra caution, similar to frying a Crispy Pata. 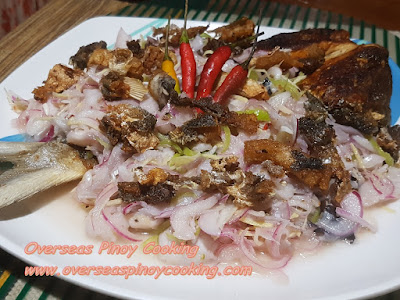 Here is the recipe of my version of Kinilaw na Bangus.

Using a spoon carefully scoop out the meat from the butterflied boneless bangus. Place the fish skin including the tail and head in in a marinating bowl. Rub the inside on the fish skin with the chopped garlic, ground peppercorns and salt. Add in the vinegar and let marinate for at least 15 minutes, keep aside until ready to fry. Cut the bangus meat into cubes, place in a bowl, add in about 1 1/2 cups of the white vinegar. Let it soak for at least 15 minutes, then drain the liquid using a sieve, lightly press the meat against the sieve to drain all the excess liquid. Using the same bowl toss together the bangus meat, ginger, onion, red chili, green long sili, ground peppercorns, kalamansi juice and vinegar. Season with salt to taste. Keep aside. Now cut off the tail and head from the marinated bangus skin. Cut the skin into wide strips. Keep aside. Heat generous amount of cooking oil until it start to smoke. First fry the bangus skin in batches until crisp. Next fry the bangus head and tail. Keep aside until ready to serve.