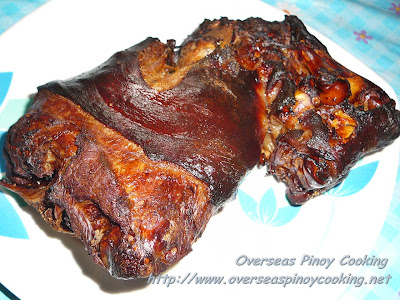 Turbo Crispy Pata. “Turbo” in Pinoy cooking refers to a dish cooked in turbo broiler, the most common is turbo chicken. On this post I want to share how to turbo cook crispy pata. This post is actually overdue, several readers have been asking if I had tried to cook crispy pata using the turbo broiler on my first crispy pata recipe a few years back. Click this link Crispy Pata, to see that post. If you are interested there is also a bonelsee version in the archives, click the link Boneless Crispy Pata to see that post. 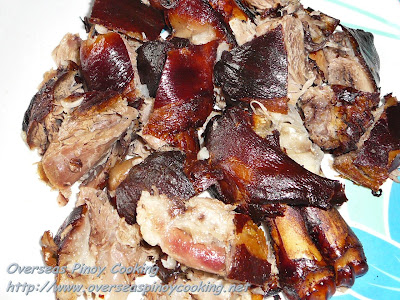 Ok back to my Turbo Crispy Pata, the idea of cooking crispy pata using the turbo broiler is to drain out or at least reduce the fats. With turbo crispy pata we have a healthier version. However the turbo crispy pata would not have the usual crisp skin with moist and succulent meat of a traditionally deep fried crispy pata. At least it is easier to cook, you won’t be dealing with splashes of hot oil. Remember this was my first attempt, there are short comings and limitations that I encountered. 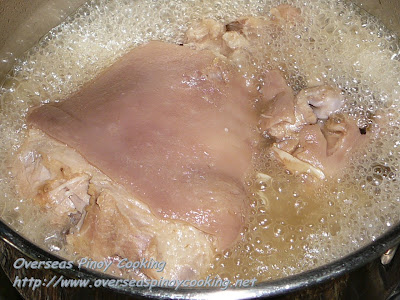 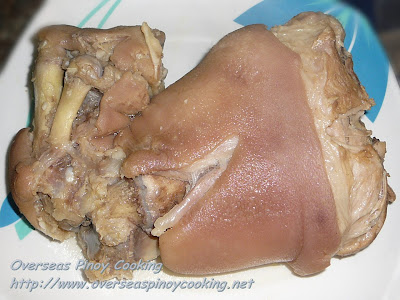 Secondly the crispy pata was dry, most of the fats were drained so with the juices. The crispy pata skin was still crisp but nothing beats a crispy pig skin with layers of soft moist fats under the skins. The meat fibers are also noticeably dry, in fact the parts where there was no skin was also crispy. The tendons near the toes are dried out, for the reason that on this part of the pork leg the meat volume was less. Next to the crispy skin I love the gelatine like tendon of crispy pata. On my next attempt I will try to reduce the cooking time, with reduced cooking time the temperature has to be increase. It would be good if the temperature could be increased but the turbo broiler max temperature is up to 500°F only, just refrain from constant opening the turbo broiler during cooking to reduce cooking time.

Pre-boiling and chilling the pork leg is still a pre-requisite. Pre-boiling method was similar to my previous crispy pata post but this time I omitted the use of 7-Up or sprite. Adding sweet soft drinks will definitely add flavour but because of the sugar on the soft drinks the skin tends to be darker when fried or broiled. 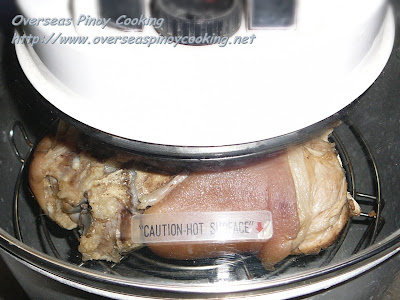 Now if you still want to try cook crispy pata using turbo broiler, here is the recipe of my version of Turbo Crispy Pata, but remember the above mentioned suggestions, good luck. 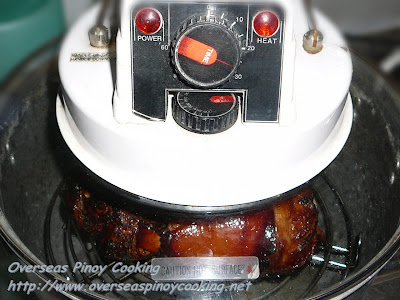 Ask the butcher to cut a slit on the knees and cut off the toes with the nail of the pork leg. Alternately cut the pork leg into several sections to fit on the bottom of the turbo broiler. Wash pork leg and place in a big pot. Add enough water to cover the pork leg. Add 3 tbsp. salt, peppercorns, garlic, bay leaves and fish sauce. Cover and bring to a boil, simmer for 1 to 1 1/2 hours or until tender. Remove all scum that rises. Remove pork leg from the pot and place in a colander and let sit for a while so the liquid will drain. Dry with paper towels if necessary. Keep refrigerated for several hours to chill.

Pre-heat the turbo broiler to 500°F or to the highest setting. Now put the pork leg over the grill at the bottom of the turbo broiler. Broil for 30 to 45 minutes or until most of the skin are blistered but not burnt. Turn over the pork leg about halfway during broiling and when the color starts to turn brown. Baste with cooking oil a few times to minimise drying out of the skin. Chopped crispy pata to serving pieces and serve hot with dipping sauce of chopped garlic, onions, chilis, vinegar and soy sauce.
See other Crispy Pata Recipes; Deep Fryer Crispy Pata Boneless Crispy Pata Crispy Pata
Crispy Pata Fried Pinoy Pork Pork Pata Recipe Roast