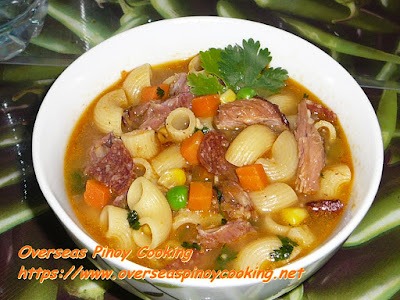 Pinoy Ham Bone Macaroni Soup. There is some Ham Bones sitting in the ref. for some time now. Today I decided to make a Macaroni Pasta Soup out of the Ham Bones. Ham bones will make great soup dish, the only problem is Ham Bones require to be slow cooked for hours to extract the flavors from the already dried out meats from the bones. 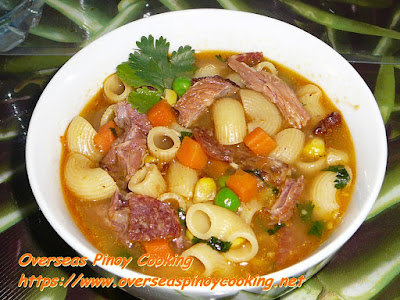 Cooking should be fairly easy except of course for the extra cooking process of pre-boiling the Ham Bones and shredding of the meats off the Ham Bones.

Here is the recipe of my Pinoy Ham Bone Macaroni Soup.

Pre-boil the ham bones: Put in the ham bone, carrot wedges, quartered onion, crushed whole garlic, crushed black pepper, celery and leeks. Pour in water up to 3/4 full. Cover and bring to a boil, and slow cook for 2 to 2 1/2 hours. Scope out all the scum that rises. Add more water as necessary. 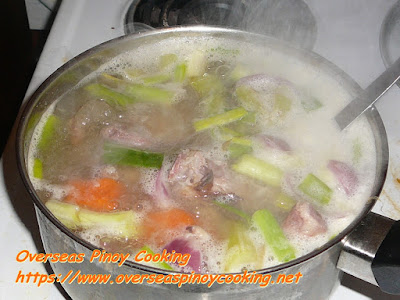 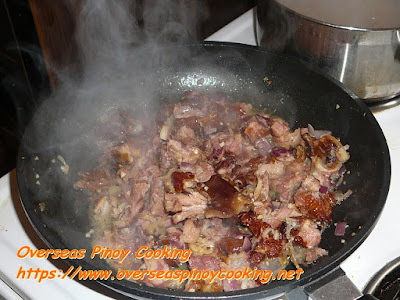 To Cook the macaroni soup: Heat some oil in a medium sized sauce pan, saute the garlic and onions until fragrant. Stir in the shredded ham meats, sliced chorizo and patis. Stir cook for 3 to 5 minutes. Now add in the reserved broth from boiling the ham bone, add more water it required. Bring to a boil and simmer for 3 to 5 minutes. Now add in the cooked mixed vegetables and macaroni pasta. Continue to cook for 15 to 20 minutes, season with salt and pepper to taste. Add in the chopped parsley on the final stage of cooking. Serve immediately.
See other Sopas recipes;
Oxtail Sopas, Oxtail with Macaroni Soup
Beef Sopas, Beef Buto Buto
Corned Beef Sopas
Chicken Sopas
Seafood Sopas
Sopas
Ham Macaroni Merienda Pasta Pasta Macaroni Pinoy Recipe Sopas Soup