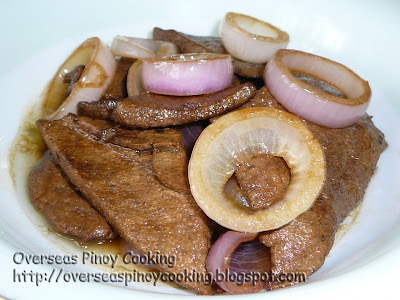 Liver Bistek Tagalog Style is another popular karinderia Pinoy dish. It is an adaptation from the beef bistek Tagalog. The beef is replaced with pork or beef liver. When cooked right this dish is delicious, it is however an acquired dish to some. Cooking the liver bistek is basically the same with the usual bistek which uses beef. The slices of liver are first marinated with the mixture of soy sauce and kalamansi with garlic. 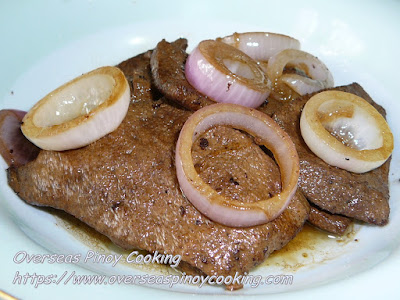 For my version I discarded the marinade after used, I wanted to get rid of the unpleasant flavors of the blood that have washed off the liver to the marinade. After frying the livers it is also important that all the frying scum residue is remove from the wok, we do not want all those ugly bits sticking on the liver or floating in the sauce. Here is the recipe. 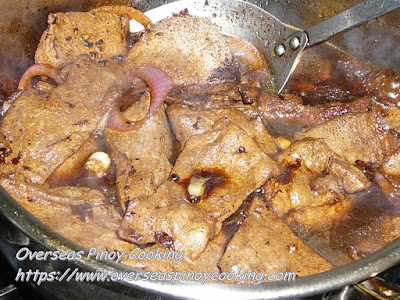 Marinate pork liver in a mixture of half of the soy sauce, half of the kalamansi juice , garlic and peppercorns for at least 15 minutes. Remove pork liver from the marinade and set aside, discard the marinade. In a wok heat a tablespoon of cooking oil and stir fry onions until translucent remove from wok and set aside. In same wok heat 3 tbsp. of oil and fry pork liver a few pieces at a time for 2-3 minutes or until color changes to golden brown. When all the pork livers are fried, clean the wok from all the frying scum residue. Now pour in remaining soy sauce, remaining kalamansi juice and 1/2 cup of water into the wok, bring to a boil. Simmer for 2-3 minutes or until sauce is reduced to half. Add in onions and simmer for a minute. Serve with a lot of rice.