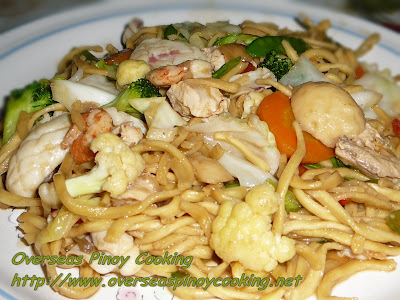 Seafood Pansit Canton. Here is a Pinoy noodle dish made up of shrimp flavored canton noodles. Now I do not need to have a seafood stock, plain water is all that is required. Bario Fiesta’s Flavored Pansit Canton comes in shrimp, chicken, beef and pork flavors in addition to the regular noodles. The shrimp flavor on the noodles is definitely there but what amazed me was the aroma while cooking the noodles.
The aroma even reached our neighbour’s attention to the point that they were requesting me to share some of the noodles when I’m done with the cooking. Cooking is basically similar to my other pansit recipe, except for some changes in the order of cooking. Because I was using seafood and vegetable ingredients which can get easily overcooked, I have to stir fry the ingredients separately.
The noodle was then cooked until it was ready to add the stir fried vegetables and seafood, it was added on the final stages of cooking. Here is the recipe.
Ingredients: 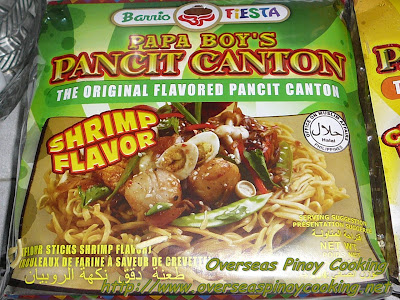 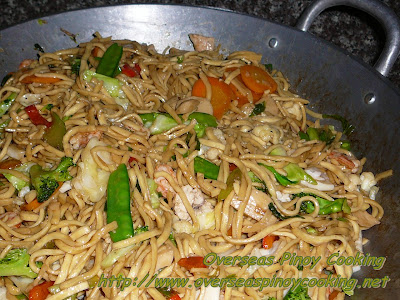 In a large wok, sauté onion and garlic. Add in the all the vegetable and stir cook for 2 to 3 minutes, remove from wok and keep aside. On the same pan heat more cooking oil. Add in the squid ball, soy sauce and black pepper, stir cook for 2 to 3 minutes. Add in the shrimp, fish and squid continue to stir cook for another 2 to 3 minutes. Remove from wok and keep aside.
Using the same wok add 6 to 8 cups of water and the oyster sauce, let boil and add in the canton noodles stir and cook for 6 to 8 minutes or until the noodles have absorbed most of the broth add more water if necessary. Add all the and stir cooked seafood and vegetables stir and cook for another 3 to 5 minutes or Correct saltiness by adding more soy sauce if required. Serve with kalamansi.
See related Pansit Noodle Recipes;La Paz Batchoy Bam-e, Pansit Bisaya Pansit Bato, Pansit Bicol Special Pancit Bato, Pansit Bicol Pansit Bihon with Vigan Bagnet Pansit Bihon Gisado Topped with Bacon Pansit Tinapa Bihon Pansit Puti, Pancit Puti Ginisang Pansit Bihon with Upo Quick Stirfried Bihon Pansit Bihon Seafood Pansit Canton with Tuna and Egg Pansit Lechon Egg Noodles with Mushroom Pancit Lucban, Pansit Hab-hab Stirry Fresh Hokien Noodles
Merienda Noodle Pansit Pansit Canton Pansit Gisado Pinoy Recipe