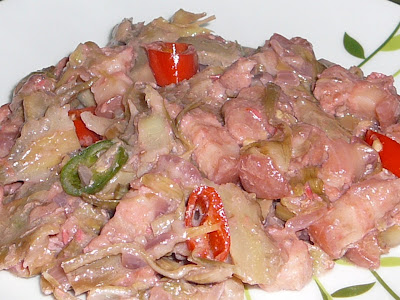 Ginataang Baboy with Artichoke, Pork with Artichoke in Coconut Milk. This one is another experimental dish that I have been planning to make for some time now. Today I found some fresh artichoke at Woolworths supermarket without hesitation I grab 3 pieces. 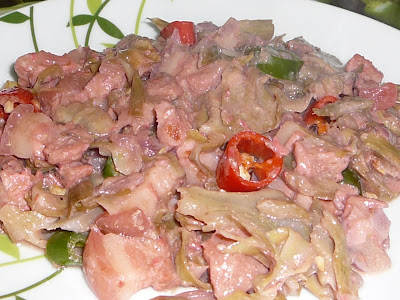 Artichoke are usually boiled or steamed, most of the edible part are on the hearth, the fibrous outer petals are peeled one at a time and discarded until the inner petals are reached, the petal stem is then dip in a mayonnaise and using your teeth the petal’s soft stem base is scraped out from the fibrous petals. 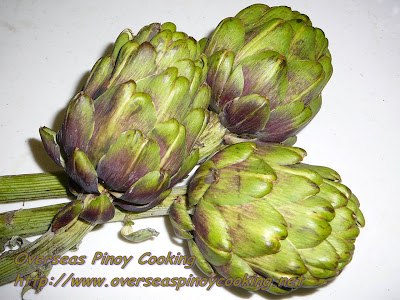 Click this link for more information about artichoke. For my recipe, to prepare the artichoke I just cut the tip at about 1/3 of the size of the artichoke this will expose the softer petals of the hearth. Then remove the fibrous petals until the hearth is reached, the remaining petals are then trimmed similar to trimming a banana blossoms. To make the dish I cooked it with a lot of pork similar to the cooking procedure of Bicol Express. Here is the recipe on how I cooked my Ginataang Baboy with Artichoke, Pork with Artichoke with Coconut Milk. 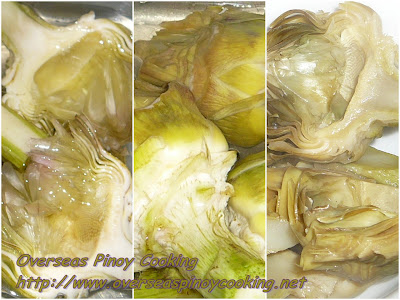 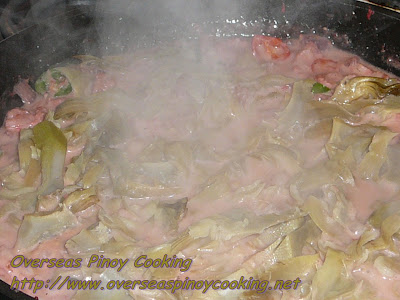 Heat wok until smoke start to appear, add in 2 tbsp. of cooking oil and sauté garlic and onion until fragrant. Add in the pork and stir cook for 2 to 3 minutes. Add in the bagoong alamang and continue to stir cook for 3 to 5 minutes 1/2 of the coconut milk and 1 cup of water, bring to a boil and simmer for 5 to 10 minutes or until most of the liquid has evaporated, stirring occasionally in between. Season with salt and pepper to taste. Add in the remaining coconut milk, chili and artichoke. Stir cook for another 3 to 5 minutes or until the liquid turn to an oily sauce. Remove from the wok and serve with a lot of rice.
See other Ginataan recipes; Ginataang Pinakbet Ginataang Santol, Sinantol Ginataang Papaya with Canned Tuna Bicol Express an authentic Bicolano dish? Ginataang Tanguige at Gulay Special Bicol Express Ginataang Alimasag with Sotanghon Ginataang Ampalaya Creamy Bicol Express with Green Beans Ginataang Sigarilyas, Gising Gising Style Gising Gising, Spicy Green Beans with Coconut Milk Asparagus with Coconut Milk, Pinoy Gising Gising Style Ginataang Sitaw, String Beans in Coconut Milk Laing at Daing, Laing with Dried Fish Ginataang Puso na Saging Ginataang Lechon Kawali at Baguio Beans Ginataang Kabute, Button Mushroom in Coconut Milk
Ginataan Ginataan Pork Ginataan Vegetable Pinoy Pork Pork Ginataan Recipe Vegetable