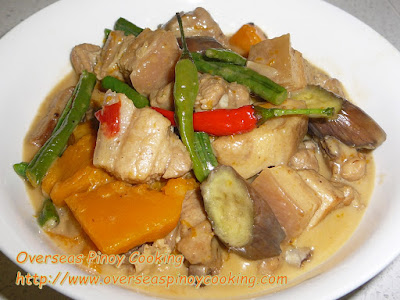 Ginataang Pinakbet. I have been planning to cook pinakbet with gata for some time now. Ginataang Pinakbet is not new. I have seen some recipes in the net already. Today I would like to share my own take of Ginataang Pinakbet. My version was cooked while I am here in Australia. Obviously I am limited to vegetables that are only available at Woolworth Supermarket. All I had was some Asian eggplants, pumpkin and luckily there were some string beans on that day. To make up for the limited vegetables I have to use generous amount of pork rashers and pork ribs. 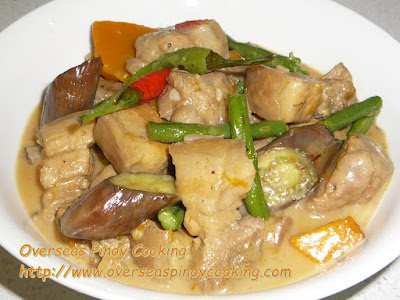 Cooking has to be tweaked from the traditional cooking of Pinakbet Tagalog. Not really a major change. Because I am now using more meat ingredients I have cooked the Ginataang Pinakbet in stages. Firstly I have to cook the pork and then the vegetables. Other than that cooking is fairly easy it is in fact basically the same cooking method with any ginataang dish. 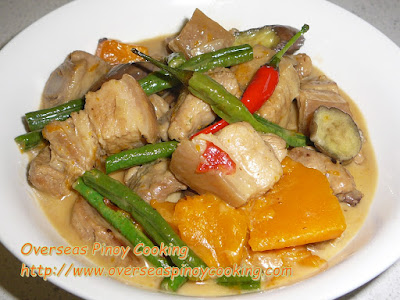 Here is the recipe of my version of Ginataang Pinakbet. 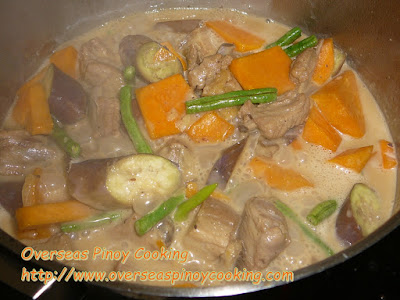 In a sauce pan sauté the garlic, ginger and onions until fragrant. Add in the pork rashers and pork ribs, stir cook for 1 to 2 minutes. Add in the fish sauce, some chopped chili and continue to stir cook for 1 to 2 minutes. Add in about 2 1/2 cups of water and 1/2 of the coconut cream. Bring to a boil and simmer for 20 to 30 minutes at low to moderate heat stirring occasionally, add more water as necessary. Simmer until the pork are tender and until half of the liquid has evaporated. Now add in the bagoong alamang, the eggplant, the string beans and the green and red chili. Continue to simmer for 1 to 2 minutes. Now add in the remaining half of the coconut cream and the pumpkin or squash. Continue to cook for another 1 to 2 minutes or until the vegetables are just cooked. Correct saltiness if required. Serve hot with a lot of rice.
Try our other Pinakbet recipes;