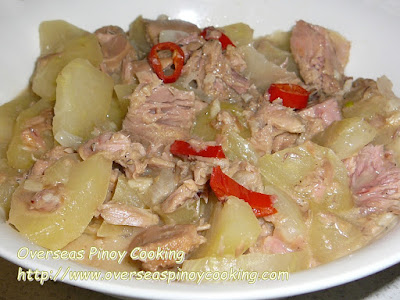 Ginataang Papaya with Canned Tuna. Ginataang papaya is usually cooked with tinapa or dried fish, I did not have both so I substituted it with canned tuna, as expected it was as good. Ginataang papaya is one of my favorite ginataang vegetable dish, there is that thing with papaya, when cooked with coconut milk that make the dish match with a lot of hot steamy rice. Just thinking about a creamy yummy Ginataang Papaya makes me droll and I am sure a lot of ginataang loving Pinoy out there will feel the same. 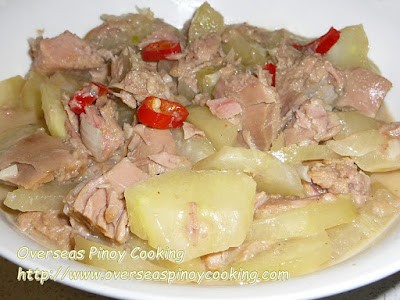 Cooking Ginataang Papaya with Canned Tuna is fairly simple. Just one reminder though, refrain from stirring to much to avoid the canned tuna being disintegrated.

Here is the recipe of my Ginataang Papaya with Canned Tuna, enjoy. 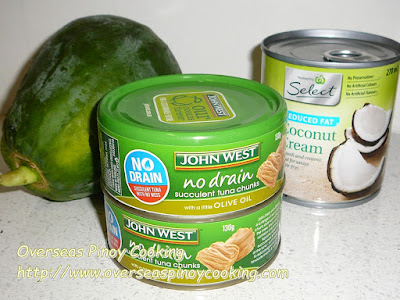 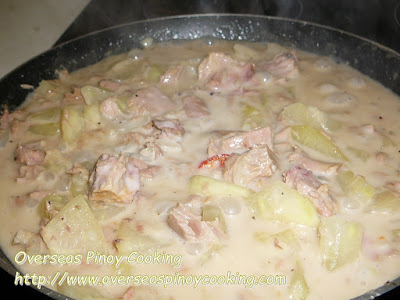 In a pan or wok, heat cooking oil and stir cook the garlic and ginger until fragrant. Add in the onion and chili and continue to stir cook for a minute. Now add in half of the coconut cream, about 2 cups of water, crushed peppercorns and the fish sauce, Bring to a boil a simmer for about 2 to 3 minutes, stirring occasionally. Add in the papaya and continue to simmer for about 5 to 8 minutes. Ad in the canned tuna including the brine or oil and the remaining coconut cream and to cook for 2 to 3 minutes or until the liquid has turned into an oily sauce, carefully stirring only once in a while to avoid the tuna being disintegrated. Correct saltines if required. Serve hot with a lot of rice.
See other Ginataan recipes; Ginataang Pinakbet Ginataang Santol, Sinantol Bicol Express an authentic Bicolano dish? Ginataang Tanguige at Gulay Special Bicol Express Ginataang Alimasag with Sotanghon Ginataang Ampalaya Creamy Bicol Express with Green Beans Ginataang Sigarilyas, Gising Gising Style Gising Gising, Spicy Green Beans with Coconut Milk Asparagus with Coconut Milk, Pinoy Gising Gising Style Ginataang Sitaw, String Beans in Coconut Milk Ginataang Baboy with Artichoke, Pork with Artichoke in Coconut Milk Laing at Daing, Laing with Dried Fish Ginataang Puso na Saging Ginataang Lechon Kawali at Baguio Beans Ginataang Kabute, Button Mushroom in Coconut Milk
Fish Ginataan Ginataan Fish Ginataan Vegetable Pinoy Recipe Vegetable