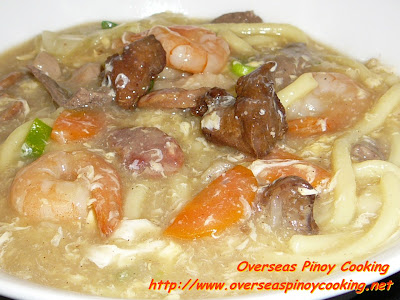 Lomi, Hokkien Noodles Lomi Style. Lomi is one of the most missed dish of overseas Pinoy for the reasons that the lomi noodles are not available on most overseas locations. There are of course some overseas Pinoy who are have access to Asian stores that sells the Lucky Me Instant Lomi Noodles but nothing is beats the real home cooked lomi. 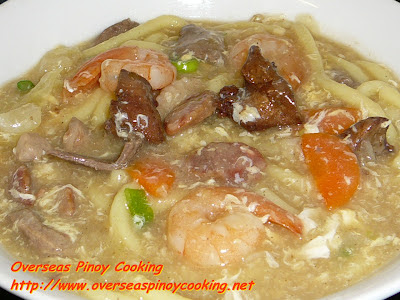 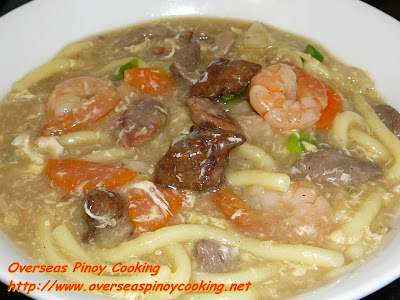 Cooking is basically the same with my other Lomi dish. Another must ingredient for a good lomi is kikiam which is not readily available when overseas, as a substitute use half a teaspoon or so of Chinese five spice or a couple of teaspoon of Hoisin sauce both should also be available at the Asian section of most supermarket. Here is the recipe of my Lomi, Hokkien Noodles Lomi Style. 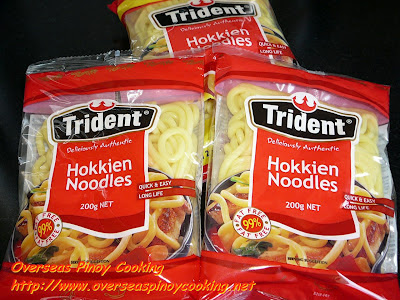 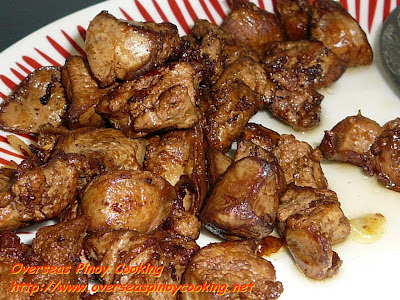 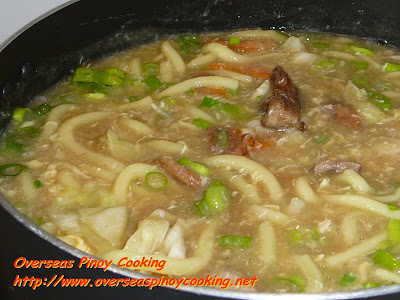 Nilagang Saging na Saba , Nilagang Saba is one simple comfort food that we used to enjoy when fast-food was not in our vocabulary. And to this date I could say that it is still a regular merienda in the countryside, Plantain bananas are abundant in the Philippines and they are always available in our city wet markets. Banana-q , minatamis na saging and turon are the more popular method of cooking saba aside from nilaga. Nilagang saging is more associated as comfort food to most Pinoy especially during the rainy season. One comport food with minatamis na saging ingridient is the  Ginataang Halo Halo . Nilagan saging is also peddled by street vendors along popular provincial bus routes and bus stations in the country, they are cheap, very filling and of course delectable.  Cooking is very simple plantain bananas are boiled for with peel on. Ingredients: 12 pcs. saba, plantain banana. Cooking procedure: Using a knife cut individual bananas out of its stem and
Read more 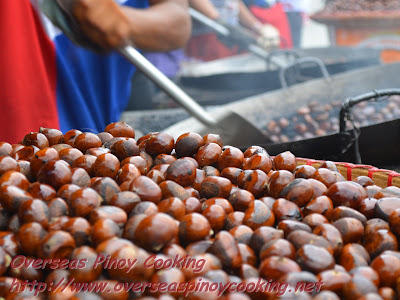 Castañas, Castanas, Roasted Chestnuts . Roasted chestnut is one food indicator that Christmas is evident . The castanas photos on this post were taken last December 25, 2011, I could have posted it earlier but I wanted to first post dishes for the 2011 Celebration’s Recipe series. This castanas food trip post may be late but it is still relevant as I could still see them sold at Metro Manila’s Sidewalks, Supermarkets and Malls. I though the price would significantly drop down by now, but they have remained or just gone down few pesos per kilo after the Christmas Seasons , perhaps the price will remain till the Chinese New Year . To those who do not know castanas or chestnuts are come from a chestnut tree. In the Philippines chestnuts are usually roasted in big woks with volcanic stones, the small stones and chestnuts are tossed together in the wok at high heat. The stones acts as heat conductor that evenly cook the chestnuts . The chestnuts that are sold in the P
Read more 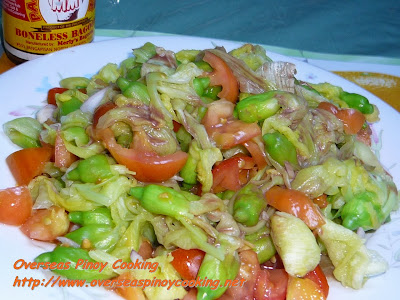 Ensaladang Katuray , I am sure a lot of you are wondering what katuray is? Katuray is a small tree that is normally grown at backyards in the provinces. When in bloom you wont miss the tree full of white butterfly like flowers. The flowers are harvested before it is fully open and it is normally cooked with other vegetables like dinengden or bulanglang and of course this beautiful salad on this post. There is no special way of cleaning just remove the stem, open up the petals and remove the stamen and /or pistil of each flower. When cooked it gives a bitter sweet taste and a slight leathery texture. Once in a while you could find them in the supermarkets, but when they are in season surely you could buy them at wet markets. Ingredients: 1/2 k. katuray flowers 1 medium size tomato, chopped 1 small size onions, chopped thinly 2-3 tbsp. bagoon na isda 2 tblsp. vinegar Cooking procedure: Trim stem and remove stamen and/or pistil of each k aturay flower and rinse. I
Read more