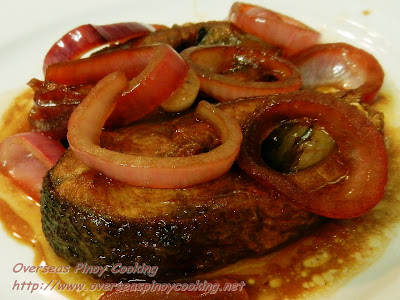 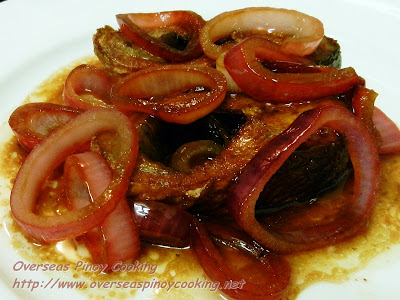 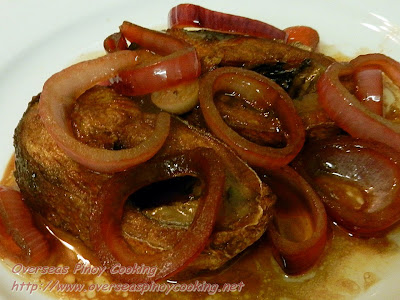 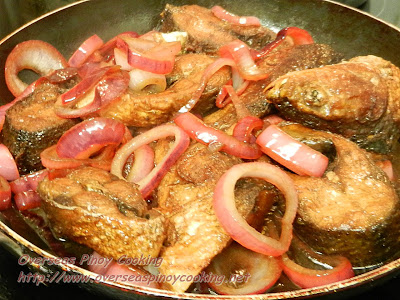 Marinate milkfish slices in a mixture of half of the soy sauce, half of the lemon juice, garlic and pepper for 15 to 30 minutes, place in the refrigerator. Remove the fish from the marinade and discard the remaining marinade. In a wok heat generous amount of oil and fry the milkfish slices in batches for 1 to 2 minutes each side. Expect a lot of oil splashing, cover wok with lid. Drain excess oil in paper towel, keep aside. Using the same wok discard excess oil and stir fry onions until translucent remove from wok and set aside. Pour about 2/3 cup of water, the remaining soy sauce and lemon juice into the wok, bring to a boil. Simmer for about a minute until sauce is reduced to half. Return the fried milkfish, add in the onions and cook for another half a minute. Serve with a lot of rice.
See other Bistek recipes: Fried Snapper Pinoy Bistek Style Fried Salmon Pinoy Bistek Style Tanguige Bistek Tagalog Tuna Bistek with Eggplant Bangus Belly Bistek Tagalog Pork Bistek Pork Loin Steak, Bistek Style Pork Chop Steak, Bistek Style Beef Sirloin Steak, Bistek Style Bistek Stir Fry Bistek Bulalo with Pineapple Bistek Bulalo Bistek Liver Bistek Chicken Liver, Bistek Style Mushroom and Tofu, Pinoy Bistek Style
Bistek Fish Fish Bistek Fried Pinoy Recipe