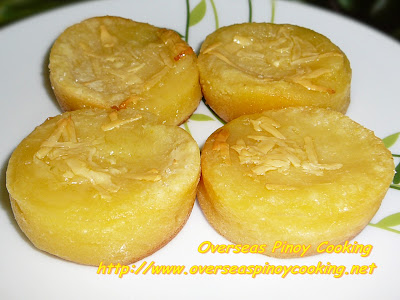 Special Vigan Royal Bibingka One of the most view recipe of OPC is the recipe of Royal Bibingka. There were quite a lot of reactions on that post mostly feedback of good results and some clarification of the ingredients and cooking method. There were some readers also that are suggesting some improvements both alternative ingredients and cooking method. As I have mentioned in that post the Royal Bibingka is synonym to Christmas in Vigan. Since Christmas is approaching I decided to make another post on Vigan Royal Bibingka which is a special version. Some of my Ilocano readers will surely know that Royal Bibingka was made about the size of a large plate in the old days. The batter was from wet grinding the glutinous rice using a stone hand mill of which is called gallapong. Today dry starch or flour from glutinous rice are readily available even overseas. The bibingka was then baked in clay stove where hot charcoals can be placed under and over the clay pot. The Vigan Royal Bibingka has now evolved both in size and in cooking method they are now baked in gas or electric ovens the size of muffins.
Vigan Royal Bibingka Original Recipe by Overseas Pinoy Cooking 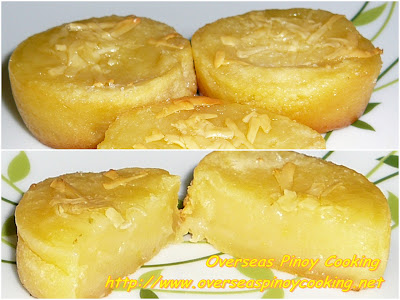 On this special version of Vigan Royal Bibingka I substituted some ingredients from my original recipe. I now used thick coconut cream in can instead the original coconut powder. The reason I used the coconut powder on my earlier version was to have more concentration of coconut milk (using more coconut milk will substantially improve the taste) which was not possible with fresh coconut milk at that time since the recipe only needs a minimal quantity of liquid. With the availability of concentrated canned coconut cream/milk now I replaced the coconut powder. I could have used the fresh pure coconut milk that is extracted by mechanical contraption at Metro Manila wet markets but that will wait till my next vacation. I also used egg yolks only instead of whole eggs, this has improved the richness beside the improvement of the color. Another twist I made was the use of fresh milk instead of canned evaporated milk for smoother consistency. I now made the bibingka the size of muffins using silicon muffin moulds. The only set back was I could not source the must ingredient, Star Pinoy margarine, although the margarine I used was more superior to the Star margarine the Pinoy aroma of the Pinoy margarine is an essential ingredient. 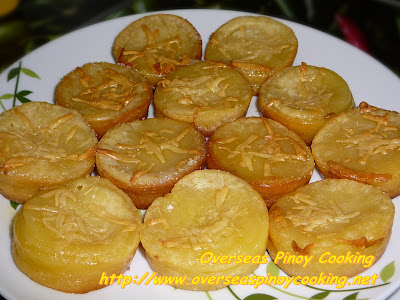 I have to my best tried to stick to the quantity of ingredients, cooking times and cooking methods so that I could rectify shortcomings and highlights important procedures to ensure that everyone can duplicate the recipe as I am expecting a lot of the readers will have a try on this new version. I would like to reiterate to stick to the recipe, deviate only if you have a lot of experience in making bibingka particularly this type. Do not go beyond the recommended baking times. You may notice that some of the bibingka on the photo are a bit overdone, that was because I wanted to brown the cheese topings. But again still you have to carefully monitor and adjust accordingly since different baking ovens are not always the same. The recipe below makes 12 muffin size Vigan Royal Bibingka. Here is the recipe of my version of Special Vigan Royal Bibingka, Vigan Bibingka. 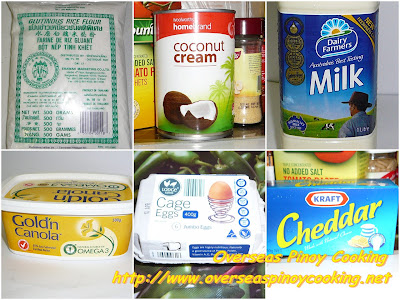 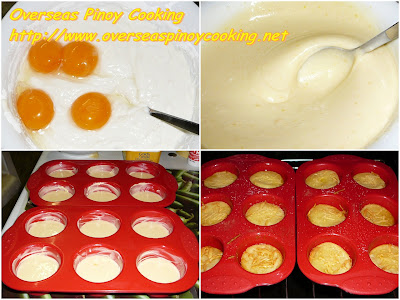 In a big bowl place the glutinous rice flour and sugar. Whisk in the milk and coconut cream until runny batter is formed. Add in the egg yolks and continue to whisk until fully blended. Coat the muffin molds with margarine. Spoon the batter into the muffin molds, about 4 table spoon each mold. Arrange the silicon molds in a baking tray and cover with aluminium foil. 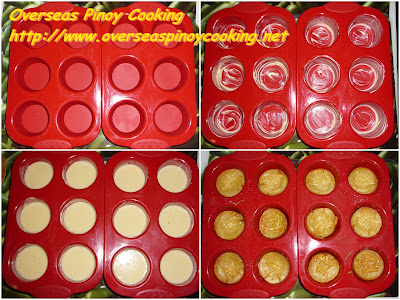 Bake in an oven at 350°F to 375°F for 15 to 20 minutes. Now remove cover of the now half cooked bibingka and top with cheese and sugar. Return aluminium covering and bake for another 25 to 30 minutes. Adjust baking time as necessary. Remove the aluminium covering during the final 10 minutes of baking. Brush with margarine at least twice in between. 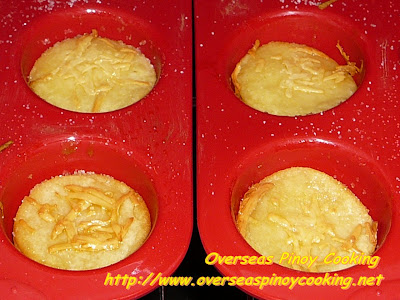 When the cheese start change color remove from the oven and brush again with margarine. Let cool down, remove from mold and serve.