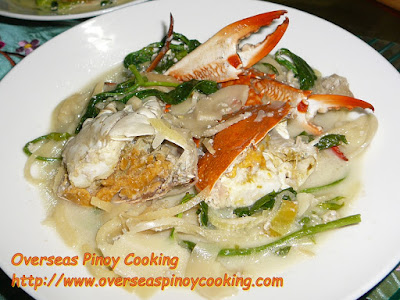 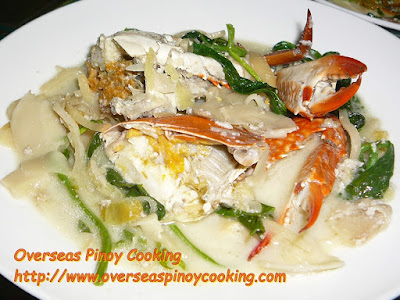 Today most bamboo shoots in most vegetable wet market and supermarket in Metro Manila or any other places in the Philippines are sold already pre-cooked. Wait, it may already be cooked but you still have to re-cooked it at your kitchen for two reasons, to remove that unpleasant oxidation odor and to kill any bacteria that may have accumulated during the handling and un-sanitized market conditions exposure, this requires re-boiling the bamboo shoots and discarding the boiling liquid. 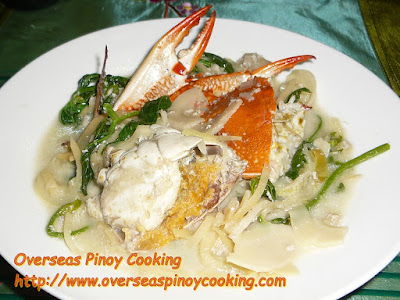 Now we are ready to cook our Ginataang Alimasag with Labong, here is the recipe. 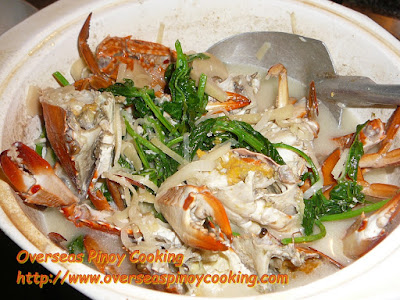 Remove belly flap of each crab wash and drain. Cut each crabs at mid-section in half set aside. In a large pot sauté garlic, ginger and onion until fragrant. Add 2 cups of the pure coconut milk and 1/2 cup of water bring it to a boil and simmer for 2 to 3 minutes, stirring occasionally. Add in the bamboo shoots and simmer for 8 to 10 minutes or until the liquid is reduced to about half, stirring occasionally.  Add in the remaining coconut milk, crabs, green chili, string bean tops and fish sauce. Cover the pot and cook for another 3 to 5 minutes. Correct saltines if required. Serve hot with a lot of rice.
See other Ginataang Crabs and Prawns recipes: