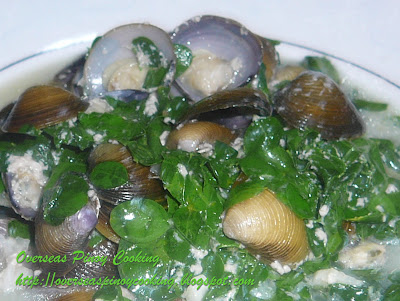 Ginataang Halaan. This is the first time I have tried to cooked clams with coconut milk. I adopted the recipe from my previous post on ginataang kuhol about a couple months ago. It was not that perfect, the coconut milk curled as I forget to stir it properly at some point. Other than that it was a great healthy dish. I like my halaan cooked the tinola way but guinataan is a good alternative to cook your halaan should you like something different from the usual tinolang halaan. 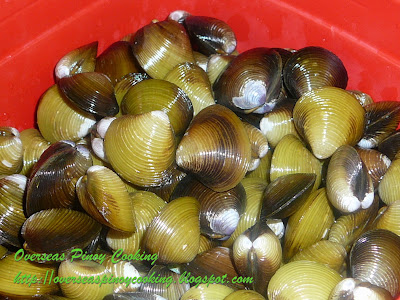 Place clams in a plastic container with lid, cover with water and let sit for several hours to allow the clams to expel sand and discard sea water, change water frequently, wash and drain. In a skillet or wok sauté garlic, ginger and onion. Add in siling labuyo and 3 cups of the coconut milk, bring to a boil and simmer for 15 to 20 minutes or until liquid has reduced to half, stirring occasionally to prevent from curdling. Add in clams, the remaining coconut milk and malungay leaves. Cook for 2-3 minutes or until all the clam shells are open. Season with salt to taste as necessary. Serve immediately.