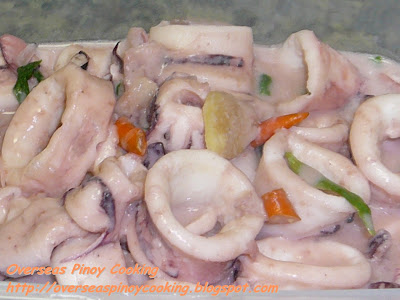 Ginataang Pusit. I have been yearning to cook this dish for sometime now. I do have several squid dish now on the archives. This addition is my version of ginataang pusit I have been cooking like this ever since. There is not much recipe for ginataang pusit in the net. I have made several searches before, hoping to find how the Bicolanos cook their ginataang pusit. The dish is common in Bicol they also add some vegetables in the dish. I wanted the dish as cream white as possible to have a better visual appeal so I have discarded the ink sack and the eyes which gives a dark tint. I know the real flavors of a good squid dish are from the ink so should you wish to have the inks you could always add them. Enjoy. 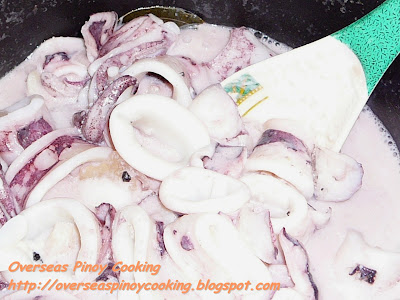 To clean the squid, pull out the head and the innards will come out with it. Discard and ink sacks entrails remove teeth, cut/discard the eyes keep aside the tentacles. Remove the membrane from the body and wash out entrails. Final wash squid and drain. Slice body into 1” to 2” crosswise. Cut tentacles in proportion to sliced body. In a sauce pan sauté garlic, ginger and onion remove from pan and set aside. Using same oil stir cook squid for 1-2 minutes, remove from pan and set aside. Put back the sautéed garlic, ginger and onion and add in the peppercorns, bay leaf, vinegar and coconut milk powder diluted in 2-3 cups of water simmer for 15-20 minutes or until it is reduced to half and start to thicken, stirring occasionally. Now add in the squid and chilli stir cook for another 1-2 minutes. Season with salt to taste and garnished with spring onions. Serve hot with lots of rice.