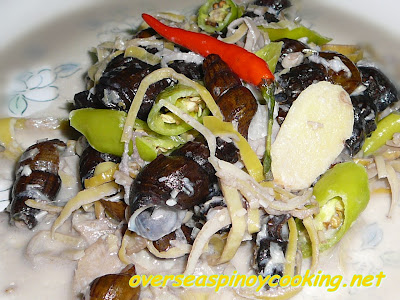 Ginataang Susong Pilipit with Banana Blossom. Susong pilipit is a fresh water shelled molluscs with long spiral shell. It is commonly found in rivers, creeks and even in irrigation channels in the Philippine countryside. It is usually cooked in a variety of ways but it is best cooked with coconut milk with a lot of chili. Guinataang Susong Pilipit with Banana Blossom is my first uniquely Pinoy dish that I want to share after a long hiatus. The spiralled shelled molluscs caught my attention on my first visit to the wet market on the my first day of my leave here in the Philippines, I understand that a lot of OPC readers are not into these type of food but I also know that there are more readers that like or have grown up with the dish on their dinner table occasionally specially with those who lived near the rivers. 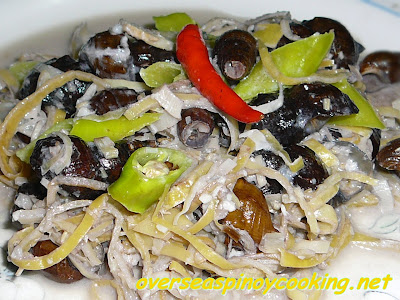 Cooking is fairly easy however cleaning the shelled mollusc is a bit tedious. First the mollusc has to be placed in a bucket for several hours if possible the whole day, the process will make the mollusc spit out the dirt and silt that are trapped inside their shells. The water should also be change several times. Do not forget to cover the bucket with a heavy weight over it to refrain the mullocks from escaping, otherwise they will be all over your kitchen.

The next step is cleaning the shells this can be done using a kitchen brush or use a stiff side of the dish washing sponge, this will ensure that dirt that are stubbornly attached to the shell. At his time start to discard the dead ones, do not hesitate to discard them, if suspected that it is dead just throw it to the bin.
Next, the pointed tip of the shell is to be chopped off, remove about one third of the shell length using a big chopping knife or a bolo. Throw away those that are smelly, they are definitely dead.

Pre-boil the cleaned susong pilipit for about 2 to 3 minutes and rinsed, the process is needed especially if they are bought from the wet markets and is not sure where it was harvested.

And the final tip, use generous amount of coconut milk and a lot of chili if you can stand hot food. Here is the recipe of my Ginataang Susong Pilipit with Banana Blossom. 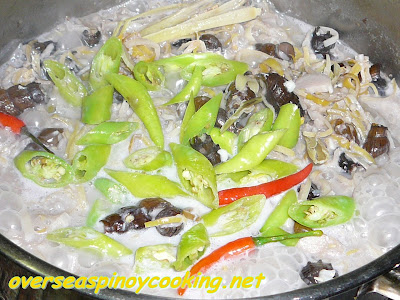 Place mollusc in a plastic container with lid, cover with water and let sit for several hours to allow the mollusk to expel dirt and discard water, change water frequently wash and drain. Wash each shell using a kitchen brush or scrub, discard the dead ones. Cut off tip of each shell about 2/3 length using a big knife, discard broken shells and remove all visible entrails. Wash several times and drain, set aside. In a large pot boil enough water then add the mollusc boil for about 2 to 3 minutes, discard boiling water and rinse with fresh water, keep aside. In another pan sauté garlic, ginger and onion stir in the bagoong alamang, styr cook for about 1 to 2 minutes. Add in the lemongrass, banana blossom, enough water to cover the vegetables and 3 cups of the coconut milk, bring to a boil and simmer for 20 to 30 minutes or until the liquid has reduced to about half. Add in the remaining coconut milk mollusc and chilli, cook for another 10 to 15 minutes until the liquid is reduce to almost oily sauce. Season with salt to taste, serve immediately with a lot of rice.