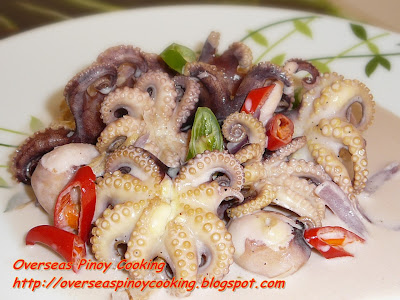 Ginataang Pugita, Baby Octopus in Coconut Milk. This has been in my “to cook” list since I’ve seen these baby octopus at Woolworths supermarket. Today I finally have the change to cook the dish for lunch. This one is fairly easy and quick, octopus should be cook really quick otherwise they become rubbery and tough. For the coconut milk I used canned, I still do not know where to find fresh ones. I used the Australian brand, it turns out great compared the Thailand brands that I have tried before. I used half a kilo baby octopus already cleaned and ready to cook. Here’s how I cook my baby octopus in coconut milk. 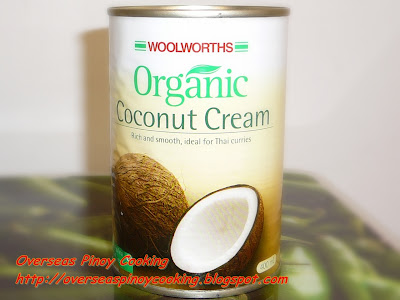 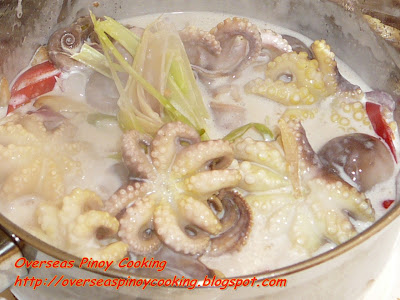 In a sauce pan sauté garlic, ginger and onions until fragrant. Add in the lemongrass and hot chili peppers, stir cook for a minute. Pour the coconut milk bring to a boil, simmer while continuously stirring at medium to low heat for 2-3 minutes or until the coconut milk turns into a thick consistency. Now add in the baby octopus and cook for another 2-3 minutes or until just cook. Season with salt to taste. Serve immediately with a lot of rice.