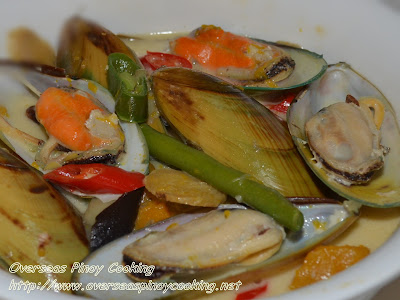 Green Mussels and Vegetables in Coconut Milk. This is a my version of ginataang tahong with vegetables. For this recipe I used squash and string beans which were the only available vegetables at the time of cooking. Any vegetables may be used for the recipe if you wish. For the coconut milk I used canned concentrated milk which are normally available in most supermarkets. Now there is nothing better using fresh coconut milk, again use it if you have access to freshly extracted coconut milk. 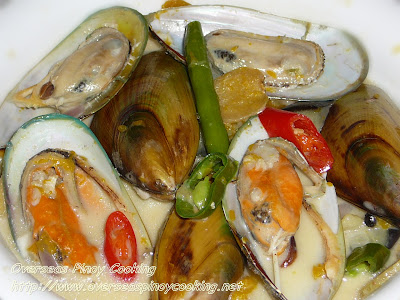 Cooking is basically similar to other seafood ginataang recipes except that the mussels were pre-boiled to remove some of the unwanted shells to give room for the vegetables in the pan. Here is the recipe of my Green Mussels and Vegetables in Coconut Milk. 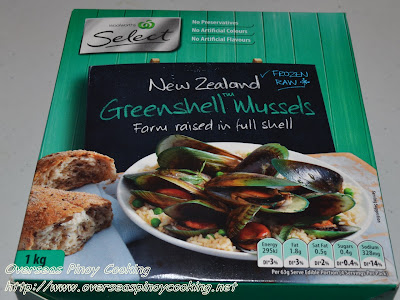 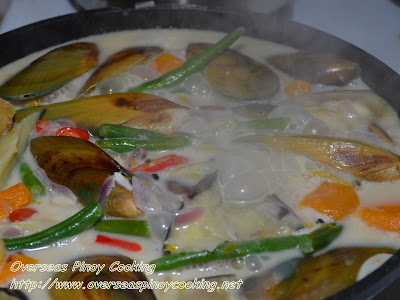 Rinse the mussels and drain. Place the drained mussels in a sauce pan. Turn the heat of the stove at medium to high heat to steam the mussels on their own juices. When the shells are opening remove from heat. Separate the juices from the mussels filter out the juices using a sieve and keep aside. Separate the shells of the mussels and discard the other half of the shells without meat, keep aside. In same sauce pan boil and reduce the mussel juices to about 1/2 to 3/4 cup remove from pan and keep aside. Heat some cooking oil in the same pan, stir in the garlic, the ginger and onion until fragrant. Add in the reserve juices, fish sauce, half of the coconut milk and the peppercorns, bring to a boil and simmer for 3 to 5 minutes, stirring continuously during the first few minutes. Add in the vegetables and chili and continue to cook for 5 to 10 minutes or until the vegetables are just cooked and most of the liquid has evaporated. Add in the mussels and cook for another 2 to 3 minutes. Correct saltiness if required. Serve hot with a lot of rice.
See other Ginataang Shell Seafood recipes: