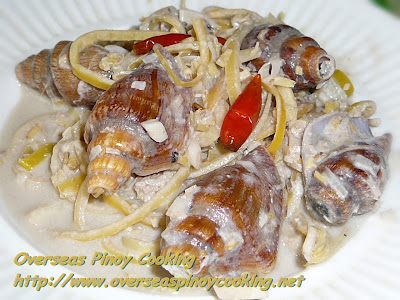 Ginataang Puso ng Saging at Saang, Banana Blossom and Conch in Coconut Milk. This recipe have been seating in my hard disk for some time now. I was trying to search for the Tagalog name of conch a type of sea shell or snail. I first had this type of seafood during my years of working in Singapore and in Batam, Indonesia. It is called gong gong, they are simply steamed or boiled and was serve as pulutan at hawker centers or food courts. 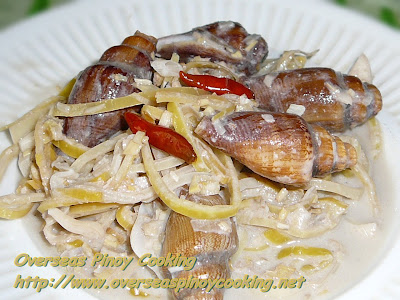 In Cebu and some parts of Mindanao it is called saang or kinason. I ask our readers who have had this food to give us feedback. The conch I used was bought at San Pedro Public Market in laguna. I was lucky that day, conch is not as regular as kuhol, halaan and tahong. I though instead of just steaming or boiling it would be best to cook it ginataang style and with banana blossom. Here is the recipe of Ginataang Puso ng Saging at Saang, Banana Blossom and Conch in Coconut Milk. 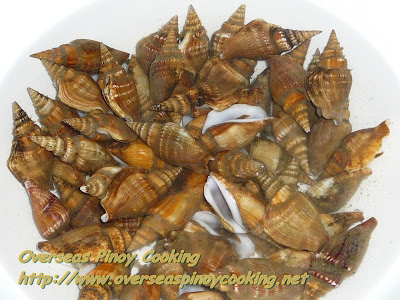 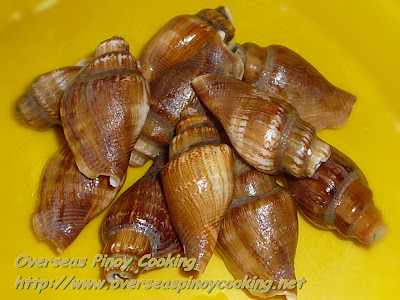 Place conch in a container with lid, cover with water and let sit for several hours to allow the conch to expel dirt and discard water, change water frequently wash and drain. Cut off tip of each shell about 2 to 3 turns using a big knife, discard broken shells and remove all visible entrails. Wash several times and drain, set aside. In a sauce pan sauté garlic, ginger and onion until fragrant. Add in 1 1/2 cup of the coconut milk and 1/2 cup of water bring to a boil and simmer, stirring constantly to avoid curdling for 8 to 10 minutes. Add in the sliced banana blossoms, siling labuyo, crushed peppercorns, fish sauce, vinegar and continue to simmer for 10 to 15 minutes or until most of the liquid has evaporated at low to medium heat stirring occasionally. Add in the conch, green chili and remaining coconut milk. Cook for another 3 to 5 minutes, correct saltiness if required. Serve with a lot of rice.