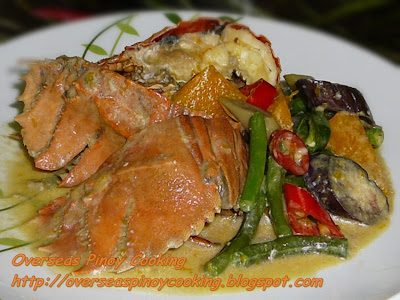 Ginataang Pitik, Slipper Lobsters in Coconut Milk is one special dish that I am sharing today. Pitik-pitik as we call them the poor cousin of lobster. When in season they, like the crabs usually come out on water surface during the night. 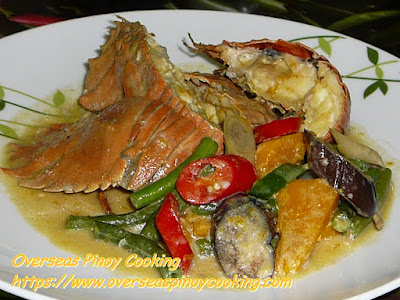 I know this for the fact that I used to worked offshore on the oil and gas industry, we build those offshore oil and gas rig structures like our Malampaya Structure in Palawan. Slipper lobsters for some reason would come up floating on the water during the night. The sea is literally full of pitik and all we had to do is scoop them out with a basket net, any of my seamen brothers out there would attest to this especially those who have been to the Arabian Gulf. 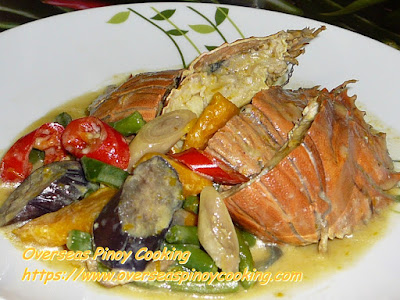 All we have to do was cook them under the heat of a large mercury bulb. But today I thought they are also good cooked guinataan style. Ginataang Pitik cooking method is basically the same with my Ginataang Alimasag, here is the recipe. 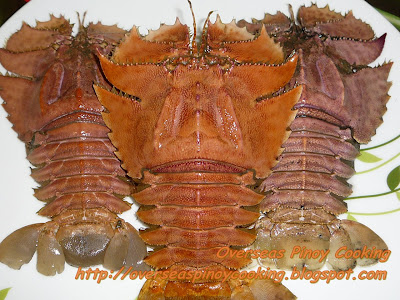 Wash slipper lobsters and drain. Steam slipper lobster for 10 to 15 minutes, cut in half and set aside. In a large pot sauté garlic, ginger and onion. Add 1 can of coconut milk, 1 cup of water and lemongrass bring it to a boil and simmer for 10 to 15 minutes stirring occasionally or until the liquid is reduced to about half. Add in lobster and simmer for 2 to 3 minutes. Add in the string beans and cook for 2 to 3 minutes. Add in the remaining 1 can of coconut milk, pumpkin, eggplant and chili, continue to cook for 3 to 5 minutes. Season with salt to taste. Add spring onion and cook for another minute. Serve with a lot of rice.