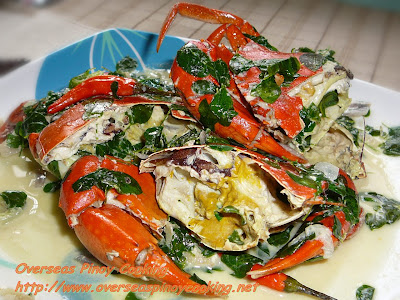 Ginataang Alimango with Malungay. Who could resist mud crabs cooked with coconut milk, and with malungay, forget about chili crabs. Ginataang alimango eaten with freshly cooked rice eating with your bare hands is truly one Pinoy feast. 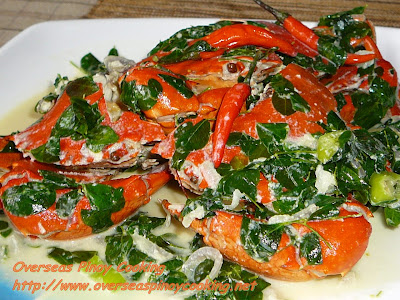 Today I would like to share how I cooked ginataang alimango with malungay leaves. The truth is there is no secret about is it is basically similar to my Ginataang Alimasag at Malungay. 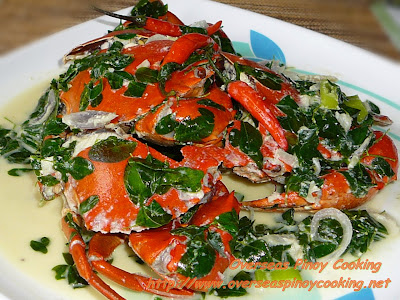 Here is the recipe of my Ginataang Alimango with Malungay. 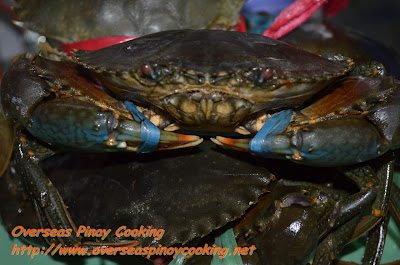 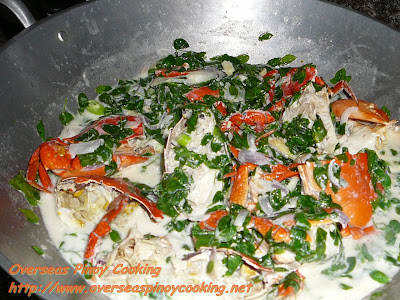 Remove belly flap and trim legs of each crab wash and drain. Cut each crabs at mid-section in half set aside. In a large pot sauté garlic, ginger and onion until fragrant. Add 1 cup of the pure coconut milk and 1 1/2 cup of water bring it to a boil and simmer for 3 to 5 minutes, stirring occasionally. Add in the crabs, red chili, green chili and fish sauce, continue to cook at moderate to low heat and continuously stirring for 5 to 8 minutes or until the crabs are cooked. Remove the crabs from the pot and keep aside. Add in the remaining coconut milk let boil and simmer for 6 to 8 minutes, stirring occasionally or until the coconut milk is reduce to about half. Add in the malungay leaves and continue to cook for 3 to 5 minutes. Correct saltiness if required. Now add in the crabs and cook for another 2 to 3 minutes. Serve with a lot of rice.
See other Ginataang Crabs and Prawns recipes: